I recently received an invite to dine at Empire Steak House down the street from my office.  I was a bit taken aback that a steak house would invite me to dinner. But the invitation was not one I could turn down considering it highlighted the many seafood options and the availability of chocolate desserts.  Since I have so many meat lovers in my life, it was easy to find someone to come with me.  Ms. A and I arrived on an otherwise quiet Wednesday evening.  The restaurant is in a space that seems to rotate restaurants, but Empire Steak House has been holding that space down since October 2010 and based on my experience I would say they are likely to be around for quite some time.  The dark carpet and dim lighting gives the space an old school steak house feel to it.  I had of course surveyed the menu prior to our arrival and was looking forward to all the seafood I could handle.  We started with  the Jumbo Lump Crabmeat. 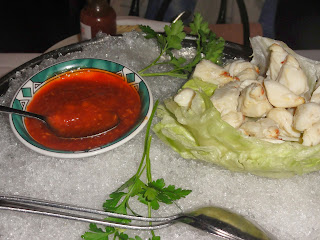 I wish I had pressed record on my camera. The presentation was terrific and the server did just that, served! The cocktail sauce was perfect, but they provided us the ingredients in case we wanted to alter the strength. 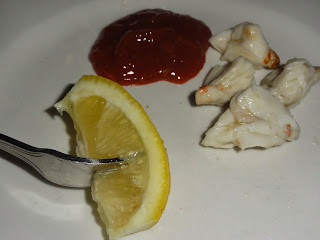 It was a great way to start off the meal.  It was also quite large and definitely a worthy appetizer for a group.  Ms. A and I reviewed the menu and made our decisions.  She decided to go for the gold and ordered the Prime Rib. 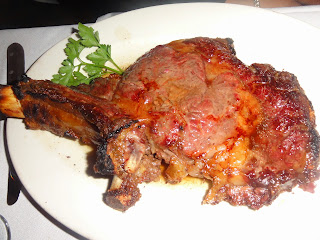 As a non-beef eater, I was taken aback by the size of the monster. Ms. A went at it and made quite a lot of progress. The steak was cooked just as she requested, well seasoned and exceeded her expectations.  I was excited for the arrival of my Seafood Pasta.  It's arrival was preceded by a bib that the server was kind enough to tie around my neck. 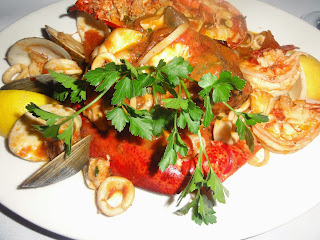 The Seafood Pasta was filled with lobster, shrimp, crabmeat, clams and salmon (their fish of the day). I requested a spicy tomato sauce.  The presentation was stellar, but I must admit I was a bit overwhelmed by just how much food had landed in front of me.  The pasta was cooked al dente and the lobster was delicious, though I wish I asked for it out of the shell. Unfortunately, the shrimp was slightly overcooked and under salted. It was just enough to notice so that was a bit annoying.  Definitely not enough to ruin the meal though or even warrant a complaint, merely worth noting.  We were both stuffed after our entrees, but of course that didn't stop us from having dessert. I definitely had a difficult time deciding so the only solution to that is multiple desserts. 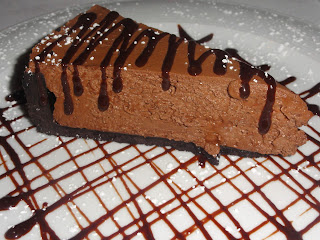 The crunchy crust of the Chocolate Mousse Cake was the highlight of dessert. It complimented the very smooth texture of the mousse. I loved it. We also had the creme brulee. 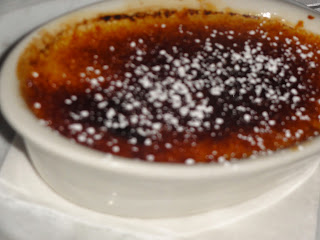 The greatest benefit of having two desserts is the balancing of flavors.  It means you never get sick of either and can accomplish your mission, which of course is to leave nothing uneaten.

I ordinarily would not select a steakhouse, but was pleasantly surprised by the experience at Empire. The food was delicious (save the undersalted pasta) and the dessert was amazing.  The service was also terrific and I noticed the bells and whistles were in place for every table not just ours. I look forward to returning this summer once the meal eaters arrive.