Hello eaters! I know it's been a while. I've been eating but so much has been happening that I haven't been writing. Please forgive me! I'm back now and will have a lot to write about given the many many dining experiences I've had.
I recently went to a press dinner at Ponty Bistro. It's a Senagalese French restaurant in Manhattan. I ate at the original location which is on 3rd avenue and 19th street. It's a neighborhood I rarely dine in these days. The location seats about 45 guests and although there's no sidewalk cafe, if you come early you can snag a seat by the floor to ceiling window that remains open during warmer months. I have been to a couple of Senegalese restaurants before but rarely have I had the kind of culinary delight I experienced at Ponty Bistro. The first dish on the warm summer-like spring evening was Gazpacho. 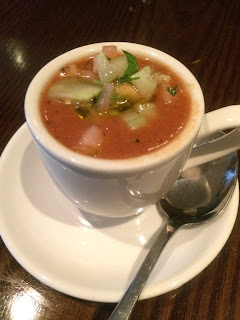 I have never been a fan of gazpacho so I was immediately skeptical. However when it landed on the table, I was pleasantly surprised by the scent of the berber spices. My first spoonful was enough to convince me. The spicy tomato based soup included cucumbers which had a cooling effect. The surprises continued when the Kale Salad arrived. 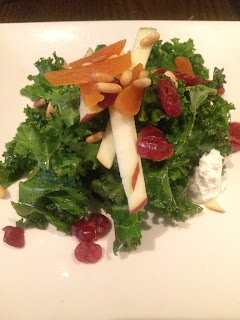 Eaters, you know I'm not about the salad life. However I must say the combination of pine nuts, goat cheese, cranberries mixed with a lemon vinaigrette dressing was just right. I was the first to finish this dish and really wanted more. I was less impressed with the Risotto. 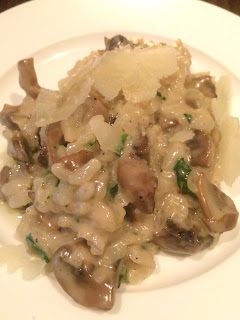 Don't get me wrong, it wasn't bad. The combination of truffle mushroom and asparagus with Parmesan cheese was actually pretty good. I just felt overwhelmed by the number of mushrooms in my tasting portion serving. They did add an interesting texture and provide a richer flavor, but the dish still seemed more rice than risotto. The Risotto was a distant memory when the African Mussels arrived. 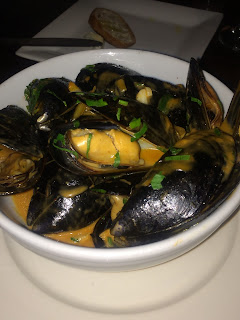 If there was a drool worthy dish, this was definitely it. The scent of the coconut milk, curry, lemongrass, and berbere spices hit you right as the bowl landed on the table. These were unlike any other mussels I've had the mussels themselves were larger than what I'm used to. The sauce was light but the flavor was HUGE. The sauce was so good we were eating it by the spoonful when we finished the mussels. The last dish was an unexpected favorite. Chicken Tagine. 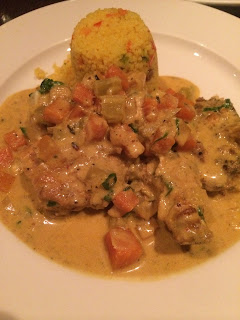 This was another dish with lively color and bold taste. It is inspired by the Moroccan dish of the same name. The onion based sauce includes a blend of rich spices. It had a little kick to it which I appreciated. The Cous Cous was also cooked to perfection and went really well with the sauce.
There's no better place I could have asked for to re-enter the blogosphere. Ponty Bistro had a diverse menu and offers a cuisine you can't find in many locations around the city. The dishes are well worth the prices especially considering the portions. I'm looking forward to trying the Harlem location soon!
Hungry yet?
Posted by Lady T at 12:37 AM No comments: