My amazingly awesome nephew turned 2 in March.  To celebrate, we went to dinner at Pappardella on the UWS.  This is one fancy two-year old I tell you.  The weather was fabulous that day but we chose to sit indoors.  After he ran around a bit trying to pick up one of the many apples, we sat down.  We started with Caprino. 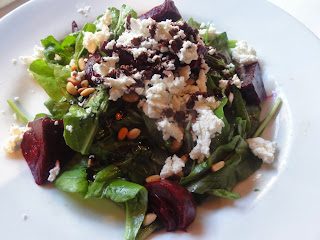 Gotta love a good beet salad.  This one was fantastic.  The combination of arugula, roasted red beets and fresh goat cheese was exactly what we needed.  The beets were perfectly fresh and tasted wonderful.  We also ordered the Caprese. 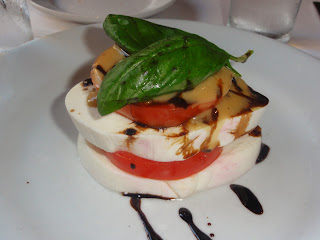 The layers of fresh mozzarella, vine ripe tomato and basil were dripped with a rich balsamic reduction.

Taking a bite from every layer was definitely the best way to enjoy this delightful treat.  The birthday boy shared the Rigatoni Bolognese with his mom. 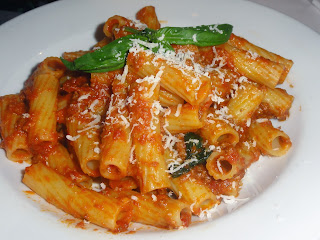 He loved the huge pieces of pasta that hid pieces of beef & vegetable ragu in every crevice.  His uncles went for the Pappardelle Manzo Brasato. 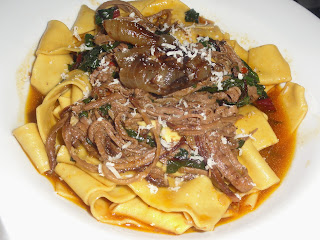 They love a solid beef dish.  This one with braised beef, swiss chard, caramelized onion and bread crumbs was well received.  There wasn’t a morsel left on the plate by the time they were done.  I had a hard time finishing my hearty portion of Spaghetti Frutti di Mare. This is one of my favorite dishes to order at an Italian restaurant.  Big chunks of lobster meat, shrimp, calamari, mussels and clams topped with a fresh plum tomato sauce.  How can you go wrong?  This version was well executed, but the sauce could have used a bit more spice.

We decided to skip dessert so we could go buy the little one a cupcake and of course he loved it.  Good thing he likes brushing his teeth.  Pappardella is a restaurant I’ve overlooked a number of times, but turns out it’s actually worth eating there.  I look forward to going back for beet salad and the Spaghetti Frutti di Mare.


So about a month ago I received an invitation to dine at a new French restaurant, Jeanne & Gaston. I was super psyched especially because I was able to bring MM with me. The restaurant is inviting with its French windows but the true  gem is out back. They have an outdoor space that was still being built, but will definitely be the site of many under the stars dining experiences this summer.   The inside of the restaurant boasts simple elegant decor. The exposed brick and ceiling tiles add character.

Our dining invitation allowed us to take advantage of the $40 Prix Fixe menu. This is probably the most  generous prix fixe ever.  We were allowed to order any appetizer, entree, and dessert that we wanted. Sweeeet!  We were greeted with a wonderful surprise in the chef's amuse bouche. 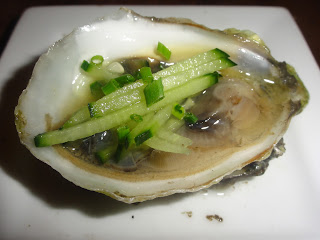 Bitter point oysters with sashimi! It was fan-effing-tastic! Seriously, I could have eaten that all night.

Thankfully there were several items on the menu that appealed to me. MM was kind enough to order items I wanted. The Tuna Tartare was fantastic! 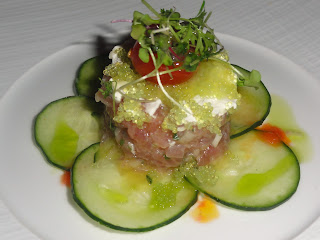 Aside from the sushi grade tuna, it was made even more delicious because it was served with wasabi caviar which was the perfect complement.  The Escargot was also an amazing choice. 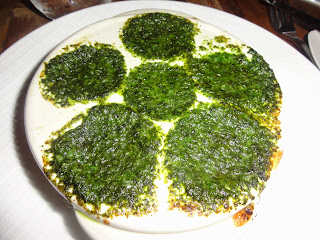 Not much to look at but truly was parsley heaven! I asked for more bread so I could truly enjoy every last drop.  It wasn't just the parsley either, the little snails were perfectly seasoned which just made for an even better dining experience. 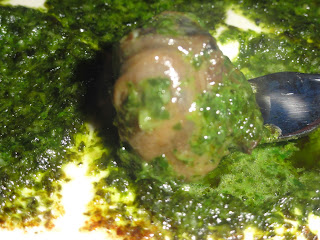 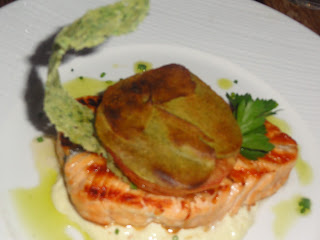 It definitely wasn't the most exciting menu item, but it was perfectly executed. The ginger and honey mustard emulsion added an unexpected flavor that wasn't decidedly French but still hit the spot. I ordered the Skate Wing special. 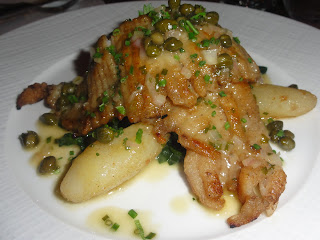 I always love ordering the fish special because it's bound to be the freshest item on the menu. This was no different, but unfortunately it suffered from being over salted. The potatoes and spinach were mild and helped neutralize the salt, but I would have liked to take a bite of the skate alone without tasting so much salt.

Of course I was stuffed after dinner but as usual I couldn't turn down dessert. We decided to try the Chocolate soufflé and the Creme brûlée. 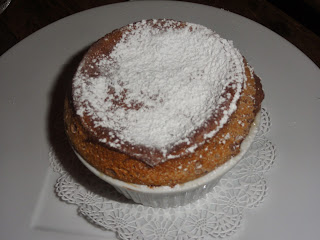 The soufflé was fine, but probably would have been better in one of the other flavors that they had. I just wasn't that into it. The creme brûlée was also lacking. 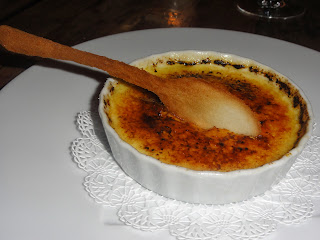 The flavors were right but it likely wasn't chilled enough or there was a little more liquid than there should have been.  It was way too melty.

The food at Jeanne and Gaston definitely makes it a place worth going back to, but there are certain items I'm more willing to recommend than others. I had a chance to sample the Mac and Cheese and I put it high on the must try list! 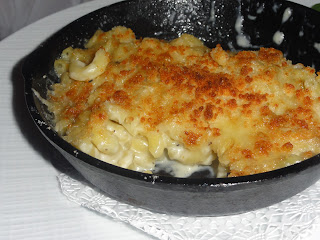 Rich flavors, crispy bread crumb top, and not too cheesy. Definitely unexpected at a French restaurant but very well done.  As the weather slowly warms up, I recommend you check out Jeanne and Gaston and claim your space in front by the French windows or in the outdoor space.

April my friends has come and gone.  Which means I missed my second Blogiversary and for the first time in two years I went a whole month without posting.  As you can imagine that means my day job has gotten the best of me once again.  Not to worry, I have some special treats in store and you can expect plenty of posts in May.  The first of which will arrive this week.  Stay tuned!!