I never realized that December was such a cookie month.  I guess I never really paid attention to the craze.  I was definitely into it last Christmas though.  In my search for an easy cookie recipe, I stumbled across this.

Ingredients
1 ¼ cups packed dark brown sugar
2 ¼ cups all-purpose flour
¾ tsp baking powder
¼ tsp baking soda
¼ tsp sea salt
1 ¾ tsps ground ginger
1 ¼ tsps ground cinnamon
¼ tsp ground cloves
¾ cup (1 ½ sticks) unsalted butter, melted
1 egg
Instructions
Spoon brown sugar into a 1-quart jar and press down until you have an even layer. Whisk together flour, baking powder, baking soda and salt in a bowl; spoon into jar over brown sugar. Sprinkle ginger, cinnamon and cloves over the top. Seal the jar until ready to use.  The jar actually looked really nice, but I can't seem to find the picture I took.  My jar had to sit around for a while, because I didn't have any ginger! About a week later, I was finally able to make the cookies.
Preheat the oven to 350°F. Empty the cookie mix into a large bowl. 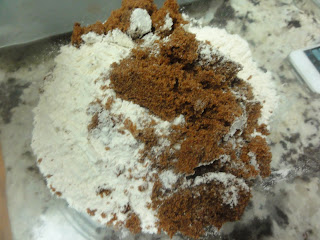 Stir in butter and egg. 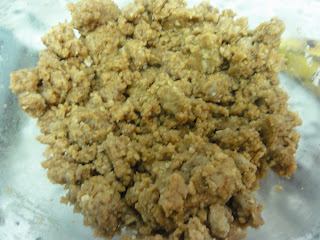 Roll the dough into balls the size of large marbles and place an inch apart on ungreased baking sheets. 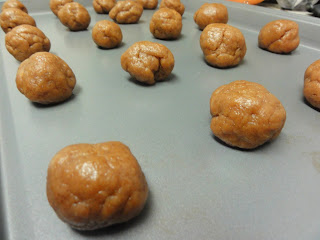 Bake in the middle of the oven until firm and lightly browned on edges, about 14 minutes. My first batch was too small. 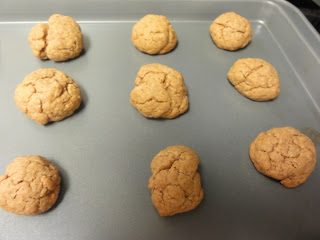 I really did not like the way the cookies looked. So I made sure to flatten the second batch. 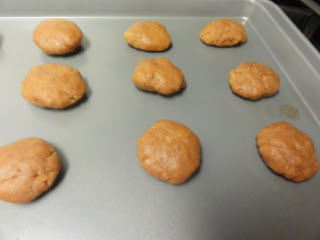 They looked a little more like what I was expecting.

Both batches had great flavor.  The cookies were slightly crispy on the outside yet soft on the inside. I love the combination of ginger, cinnamon and cloves. I try to use it throughout the fall and as much into the winter as possible.  The cookies were a hit! I’ll definitely use this recipe again in the future.
Hungry yet?
Posted by Lady T at 11:26 PM No comments:

Wow…it’s been a really busy month at work. I can’t believe this is only post number 2 for January! Yikes.  I have been eating though…sort of.  Well before the month got crazy, Ms. O and I made plans to dine at Chinatown Brasserie during Restaurant Week, which is extra long this year.  I hustled out of work to make it for our 7:30 reservation, as I was walking south on Lafayette, I got a call from work and stood outside for 10 minutes on the phone. ::sigh:: Thankfully that didn’t throw off our reservation too much. We were seated pretty quickly at a cozy half moon booth in the back.  Ms. O raves about this restaurant so I was super excited to try it.  The Restaurant Week menu was very generous, so we decided to stick to it, for the most part.  I selected Dim Sum Assortment A. 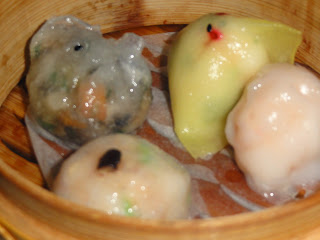 Looks yummy right?!  Clockwise from bottom left: lobster dumpling, crunchy vegetable & peanut dumpling, shrimp & snow pea leaf dumpling, and shrimp dumpling.  I tried to take at least two bites of each dumpling so I could truly savor the flavors.  One bite was sans sauce and the other I dipped in one of the many sauces that arrived on our table. 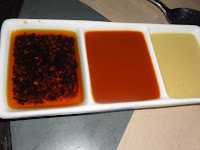 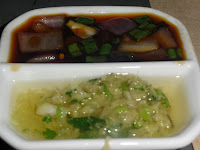 After eating the sampler, I realized I definitely need to make my way to a dim sum restaurant stat! Ms. O ordered Assortment B. 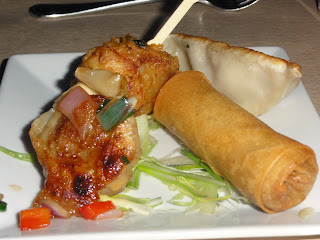 Clockwise from bottom left: spicy lamb dumpling, chicken & shrimp lollipop, pork potsticker, and vegetable spring roll.  Being the glutton that I am, I was thrilled when Ms. O suggested we add another dim sum. 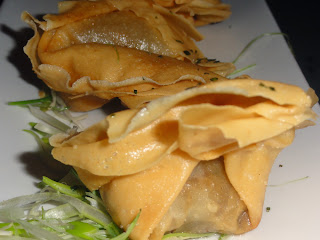 The Spicy Duck & Flowering Chive Wontons were phenomenal! Crispy crunchy goodness on the outside and tender flavorful duck on the inside.  The best part was that it wasn’t greasy!  The Restaurant Week menu had several great main course options, but after being deprived at Petite Abeille, we definitely were not turning away the Lobster. 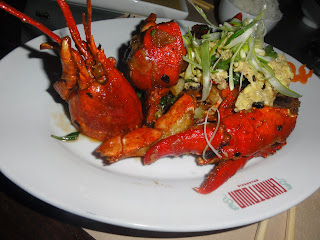 The Wok-Sautéed Lobster was served with asparagus. The sauce was sweet and a little spicy.  Every bit of the lobster was enhanced by the sauce. 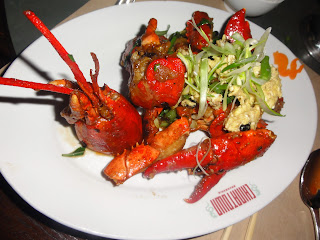 The lobster was also easy to eat because they had done most of the cracking for us! I must say it was one of my favorite lobsters.  Once our plates were filled with nothing but shells, it was time to move on to dessert. Ms. O ordered the Custard Bao. 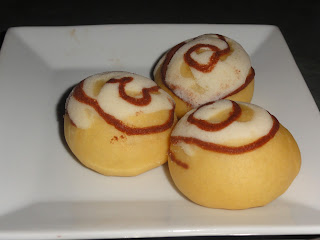 These little steamed balls of custard were surprisingly flavorful. They were airy and had a smooth texture.  I was more interested in my Chocolate Mousse. 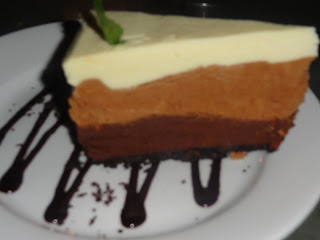 I lit up when the cake arrived, because I was definitely not expecting it.  The cake was excellent. The chocolate trio combination was perfect and the cookie crust was just the right touch.
Chinatown Brasserie was amazing and I definitely see why Ms. O is a fan.  Even though I had to return to the office after dinner, I had a smile on my face thanks to that fantastic meal.  I can’t wait to go back!
Hungry yet?

My first post of 2012 and it’s #400! Wowee! It’s only right that such a milestone is about my meal with my PIC and Mr. R.   The traveled far and though I wasn’t their final destination, it was nice to serve as a resting place.  Since Mr. R is a fan of French (but not expensive French) I figured Chez Lucienne in my ‘hood would be a great place to dine.  It’s been open for a couple of years, but I’ve never managed to make it there. The décor is uninteresting, aside from the semi open kitchen. I always like taking a peek at what’s going on back there.  We started with a few appetizers.  PIC ordered the Saucisson en croute. 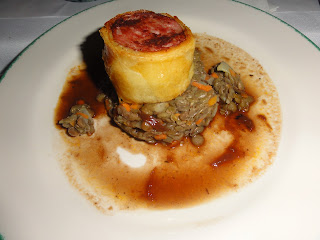 A roasted pork sausage wrapped in a pastry shell, served with lentil salad. Leave it to him to order something I can’t eat.   He enjoyed it and tied to stop himself from finishing it so he could save room for his entrée.  Mr. R and I shared two appetizers.  The Escargots De Bourgogne Paysanne arrived first. 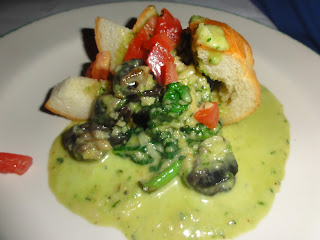 Lovely little snails cooked in garlic and butter with a mix of spinach and tomatoes served on a toasted baguette. It was heavenly!! The flavors were incredibly rich and the addition of spinach added a nice weight to each bite.  We also ordered the Mussels Hot Hot Hot. 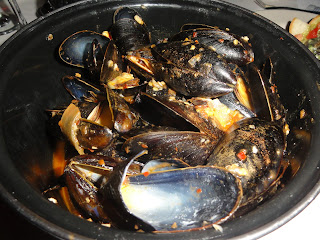 They were fantastic! It reminded me of my trip to The Mussel Pot. Now I can get delicious spicy mussels without leaving my neighborhood!  The appetizers were definitely a win.  Unfortunately, the rest of the meal was less so.  Mr. R ordered the Bavette a l'echalotte. 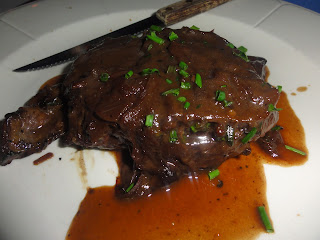 It didn’t quite live up to his expectations. He described the Grilled herb marinated skirt steak as pedestrian at best.  He wasn’t the only one left disappointed.  PIC ordered Coq Au Vin. 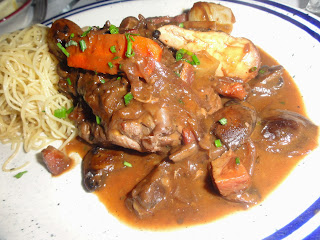 PIC was very disappointed.  He noted that it was not very good and leaves a lot to be desired.  The only thing that he though acceptable were the pearled onions.  After tasting it, I must say I agree with him.  Since Thursdays are Fish Night, I ordered the Truite Arc-en-ciel. 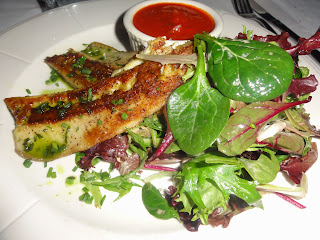 The Seared Butterfly Rainbow Trout was served with a salad. The beauty of fish night is you get to pick which sauce you want them to serve your fish with.  I chose Provencale.  What was supposed to be a blend of tomato, basil and olive ended up tasting like tomato paste.  I used just a little bit before I gave up on using the sauce.  The fish tasted good, but nothing special about it.  Perhaps it would be better with a different sauce.
I will certainly return to Chez Lucienne, but will probably stick to the appetizers and mussels.  The entrees were lacking. By no means were our entrées bad, the appetizers just overshadowed them.  Perhaps it’s because we ordered as the kitchen was getting ready to close, but I suspect they just do a better job with some dishes than others.  I look forward to returning on fish night for $12.95 mussels!
Hungry yet?