Apologies for my limited posting this past week. The hard part about having a day job like mine is that sometimes they want it to be a night job too :(  Thankfully, my guest blogger is willing to step up and help me out so expect some entries from her.

While GMTT was here, Mr. M planned several dining experiences.  Although he made my day by telling me we were going to Red Rooster, he changed it up and instead we ended up at Craftbar (yes, I know, my life is so hard one celebrity chef restaurant for another).  While I enjoyed eating at Colicchio & Sons last year, since I started watching Top Chef, I’ve decided I’m not a fan of Mr. Colicchio’s attitude.  Regardless, his food was good last year so I suppose this would be tasty too.  Meh.  I was late to dinner because I had camera issues.  The photos in this post were thanks to GMTT’s camera which has a slightly more active flash than mine. Apologies.
We were joined at dinner with Z&Z. It was so great to see them after so long.  I wanted to order dessert as my appetizer but the most appealing item on the menu, the Apple Crisp with Brown Butter Ice Cream was no longer available.  I pouted while the rest of the group ordered appetizer. 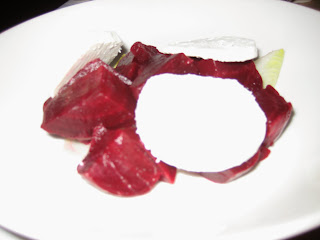 Z (female) ordered the Baby beet goat cheese salad with pistachio and candied citrus.  She found it to be “beety” I had a taste and it was fine but truthfully didn’t compare to the salad from Motorino.  Z (male) ordered the Wagyū Beef Tongue served with Horseradish Aïoli. 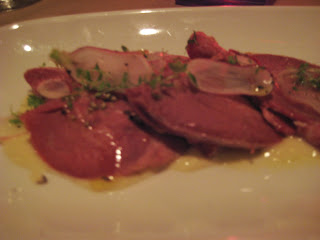 He found it to be really good and the horseradish aioli was not really spicy but the flavor enhanced the beefy taste.  GMTT and Mr. M ordered the Spanish Octopus small plate. 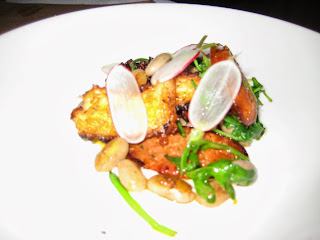 It was served with chorizo, cranberry bean and lemon greek yogurt.  Within an instant, all I saw were empty plates so this must have been delicious.  Soon after, our entrees began to arrive.  Mr. M ordered the Berkshire Pork Belly with Fried Egg, collard greens and anson mills polenta. 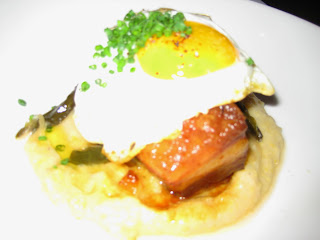 It looked interesting and he definitely enjoyed it.  Z (male) ordered the Duck Confit which was served with a white bean cassoulet and a duck egg. 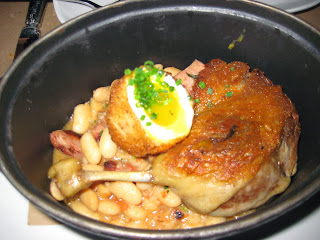 The egg looked spectacular because it was breaded outside, however I came to find out it was runny inside so I’m glad I didn’t order that.  The skin was crispy and the cast iron presentation was a bonus.  The rest of us ordered the Red Snapper with Sofrito Braised Salsify and Habanero Lime Vinaigrette. 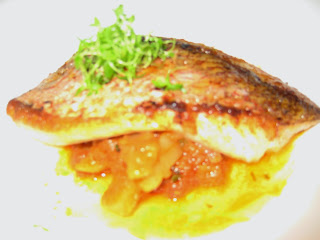 I was slightly underwhelmed by this dish.  The snapper was fine.  That’s right, I said it, just fine.  I must admit that the salsify was really tasty and possibly the most delicious part of the meal.  Expanding my range of acceptable vegetables is probably the best decision I’ve made.  I was pretty glad when the main course was over because it was time to focus on dessert.  Since my desire for Apple Crisp was so overwhelming, I strongly encouraged the group to order three desserts.  I wasn’t really in a chocolate mood so the Chocolate Custard Tart with Malted Milk Chocolate Ice Cream didn’t really appeal to me. 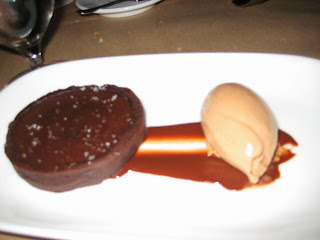 However, it was so delicious that I kept going back.  The Butterscotch Pot de Crème was PHENOMENAL. 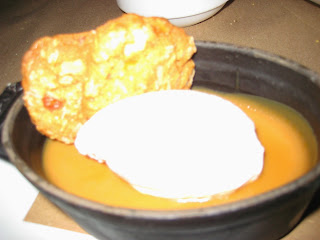 No, seriously, it was like crème brulee amplified.  However, my absolute favorite that almost led me to forget all about the Apple Crisp was the incredible Brown Sugar Cake served with a Poached Seckel Pear and Ice Cream that is invisible thanks to the flash on the camera. ugh. 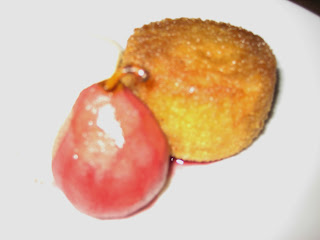 I did a little dance in my chair each time I took a bite.  It was very sweet and definitely a sugar cake, but that was exactly what I needed.  The desserts were key because they made sure the dining experience ended on a high note.
While I understand the inherent awesomeness of Colicchio, I just wasn’t that blown away by craftbar.  I’m sure part of that is based on the lack of diversity on the menu (really, Tom? Do you have to put pork in everything?!) It probably satisfies some people but I don’t recommend this restaurant for someone with dietary restrictions.  The freshness of the ingredients is highlighted by their every changing menu.  I certainly respect that.  The music was also pretty awesome – any restaurant that plays Stevie twice during the meal gets some ambiance points.  I’m not sure that I would go back to craftbar without giving the menu a once over to see if there’s something that calls out to me.  There are far too many restaurants in New York for me to compromise.
Hungry yet?