When I told people I was going to Memphis, the reaction was generally that the pork would be wasted on me. Umm okay.  The woman who checked us in recommended that we dine at The Majestic Grille.  It was a short walk from our hotel which was good, but unfortunately the food wasn’t.  I was excited for my appetizer the Cajun Chicken Eggrolls. 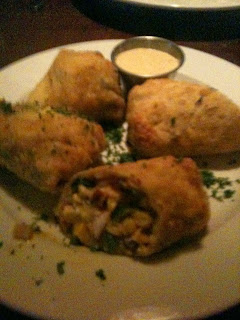 It was massive though so my first lesson in Memphis food was the portions are large.  The rolls were filled with blackened chicken, corn, cheddar, goat cheese, red onion, cilantro and Creole mustard sauce.  I was quite happy with it, but didn’t finish it.  I decided to try something different for my entrée. 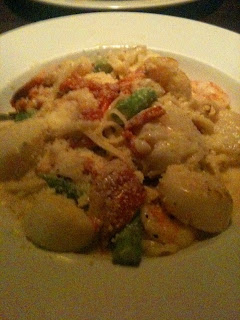 I don’t know what I was thinking but I decided to order the Shrimp and Scallop Linguini.  I think I got excited about the shrimp and scallop but completely ignored the roasted tomato cream.  I despise cream sauce. I don’t do alfredo or any other creamy sauce. It was gross. I had a couple of bites and quit. Unfortunately, several hours later, I got to taste it again L  My abs got quite the work out that night L Luckily my room came equipped with Tazo tea, which helped to soothe my tummy.
Nothing against The Majestic Grille but your food was not that delicious.  Maybe I made the wrong choices on the menu, but I think there was really nothing special about the food.  The restaurant did have a film being projected on the wall which was pretty cool.  Generally though, I’m sure there are better options in Memphis.  I’d skip this one.
Hungry yet?