I am convinced that De Santos is the most romantic restaurant in New York.  I was not expecting such a beautiful space when I was invited to a press dinner at the 4-Year-Old West Village restaurant.  The main dining room is beautifully furnished and tastefully lit.  The décor reminds me of Restoration Hardware.  The outdoor patio is a tented area that had an open back leading to the garden.  The hundreds of candles and several well-placed mirrors made sure the outdoor décor matched the inside.  I of course noticed the iPads that the servers were carrying around.  That was how they placed our orders, which was obviously impressive considering my love for Apple products.  How can you not love a company named after food?!  Our three appetizers arrived around the same time.  The Tuna Tartare was my favorite! 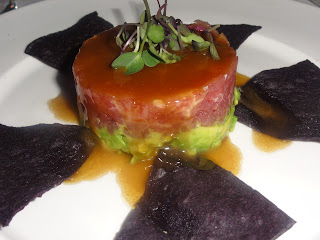 Sushi grade tuna with avocado, soy ginger vinaigrette and tortilla chips.  I ate every bite.  I didn’t want to embarrass myself so I decided not to lick the plate.   I didn’t get too close to the Beef Carpaccio. 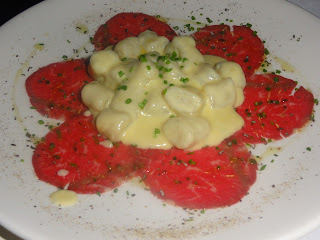 It did look fabulous and was served with homemade potato gnocchi and truffle cream.  The gnocchi was PHENOMENAL!  Light, airy potatoes with a delicious touch of truffle cream.  I will definitely request a plate of the gnocchi next time I’m there.  We also ordered the Truffle Mac and Cheese. 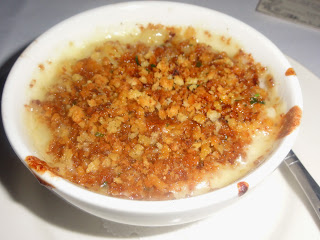 I was really looking forward to it.  The aged cheddar cheese and the noodles were quite tasty.  The herb bread crumbs were an unwelcome addition.  There was something off about them.  The cheese was also pooling at one point.  I blame it on portion control because they decided to make individual sizes for us.  The other tables had the full size and when I looked over there was nothing left in the bowl.  Eventually our entrées arrived.  The Pan Seared Scallops were beautifully presented. 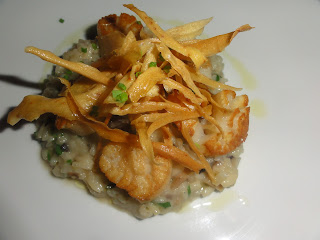 They arrived on a bed of wild mushroom risotto and parsnip chips.  I love rice and I love pasta but I’ve never really learned to appreciate risotto.  Every now and then, I would get a burst of mushroom flavor.  The risotto also enhanced the flavor of the scallops.  They were already incredible and perfectly pan seared but tasted even better when mixed in with the risotto.  I was quite happy with the entrée, but even more pleased with the desserts.  We started with the Mixed Berry Torte. 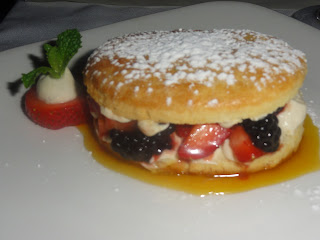 The layer of blackberries, strawberries and raspberries with cream was sandwiched between shortbread lightly dusted with confectioner’s sugar.  The shortbread was delicious and sweet and nothing better than fresh fruit to put in a dessert!  The Pear Cobbler was phenomenal. 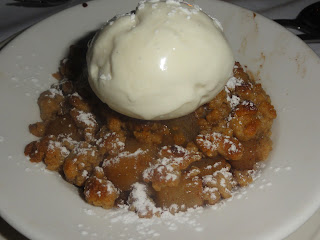 The brilliance behind this dessert was the deconstructed nature of it.  The cubed pieces of pear combined with the baked crumble were delightful.  The best part about fruit as dessert that you don’t feel guilty when you’re overjoyed by the sweetness!

De Santos was an amazing experience! I loved the décor and really enjoyed the food.  The menu is not quite as expansive as I had hoped so I hope they refine it soon.  The dishes are well executed but I would love to see more options.  After dinner I walked downstairs and saw the infamous Janis room!  The space is legendary because the building was formerly home to artists such as Janis Joplin, Bob Dylan, and Jean Michel Basquiat.  I will definitely return for music soon!