It's been two years since I first reviewed Thalassa. In New York, two years is a lifetime for a restaurant.  Thalassa just celebrated its 10 year anniversary last November so it's holding stronger than a lot of other restaurants. The decor is still modern, simple and elegant.  I was excited to attend another press dinner. Although the last time was great, I was looking forward to a curated meal selected by the chef. We started with an amuse bouche. 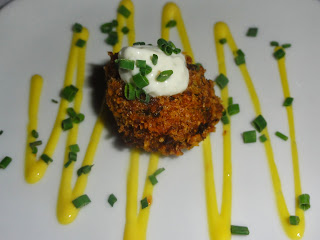 The Zucchini Fritters were quite a pleasant surprise. I didn't expect that the crispy outside would be filled with well seasoned deliciousness. Our meal was served family style but I didn't realize that would be the case until the appetizers landed on our table. 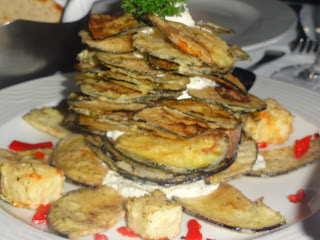 The Zucchini & Eggplant Chips didn't just look good, they tasted great. Crispy and lightly battered, I just couldn't stop going back for more.  I must admit that I really did not realize I liked zucchini until that night.  The Horiatiki Salad was not very popular at the table. 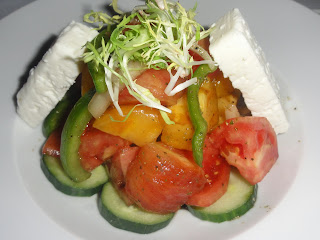 It wasn't because it lacked flavor, the tomatoes were fresh and the feta was delightful, but with all those other options, it fell to the side. Speaking of options, I was thrilled when the selection of dips arrived. 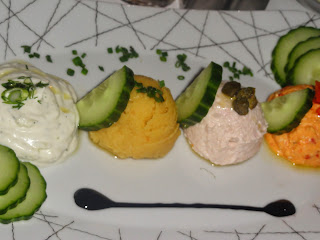 The selection included Roasted pepper with feta, Taramosalata and Tzatziki. Yummers! Thalassa is definitely the kind of place where you can fill up on lots of little items. Thankfully, we were able to also enjoy quite a few treats from various sections of the menu. The Tartare Trio was not as exciting as I hoped. 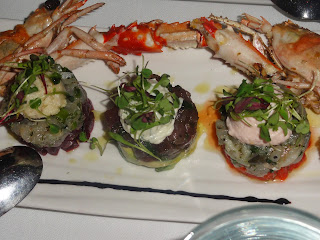 The blend of royal dorado with taramosalata, tuna with tzatziki, and lavraki with garlic almond mousse, drizzled with truffle oil did not do it for me. The fresh tartare flavor was masked by the various ingredients that were mixed in. The use of truffle oil was a nice aromatic addition but did not highlight any flavors. The dish was accompanied by two Langoustines. They were worth every bite! The Diver Scallops are still a signature dish. 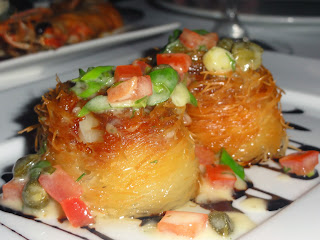 They are wrapped in filo which lends each bite a crunch taste you would not ordinarily get from scallops. Thankfully, they are presented in a clean and simple way so no one ingredient overpowers the others. By far my favorite dish was the Octopodi. 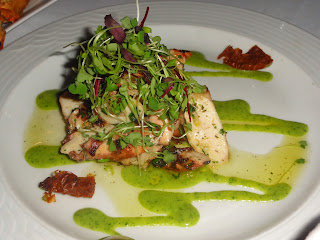 Everything you know about octopus goes out the window when you take your first bite. This is the opposite of rubbery. Each bite highlights the light flavors of the octopus. It is meaty but not exhaustingly chewy. I am a huge fan!! The chef was also impressive and showed some versatility with the Swordfish Crudo with fennel. 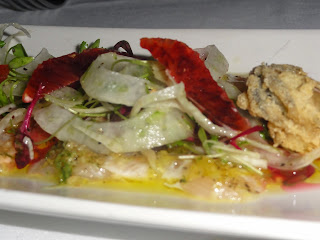 This item is not yet on the menu but I sure hope it lands there soon. I'm partial to Asian food so when I taste a delicious sushi like piece of fish, my mouth yearns for more. The slight tartness was surprising but definitely welcomed. The highlight of the entrees arrived twice. The Lavraki first appeared in whole form. 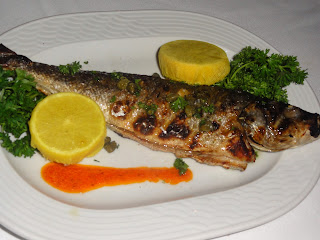 Then it showed up again filleted seasoned with salt and pepper with fresh lemon juice and a side of wilted greens. 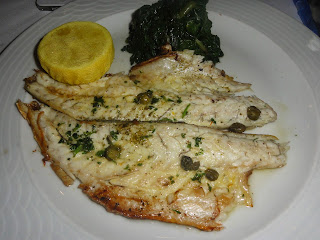 I had stuffed myself silly on the previous courses so I could only take a couple of bites. I was so disappointed that I could not finish it that for the first time ever, I requested a to-go bag at a press dinner! I was thoroughly embarrassed. But thankfully the restaurant did not add to my shame by bringing a big bag to the table. Instead they gave me this discreet little note. 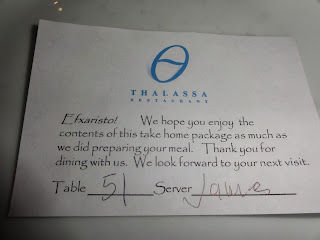 Cute right? Well later that night, I devoured the Lavraki and I'm happy to report it was equally delicious, if not more so! So you would think because I was unable to finish my Lavraki that would put me out of the running for dessert. Well then that means you have never seen Thalassa's dessert spread! As the various items started arriving, a second portal opened in my stomach and I was able to go all in. 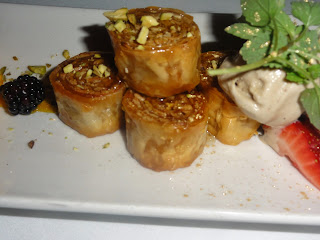 The bite size Baklava was perfectly sweetened with honey and the filo was light and crunchy. The Yogurt cake was a different kind of taste and not really my speed and the Ekmek was not worth the hassle. 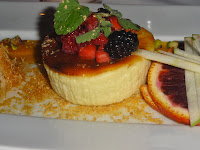 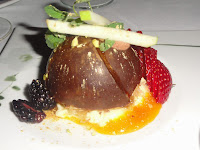 On the other hand, the Molten Cake was incredible. 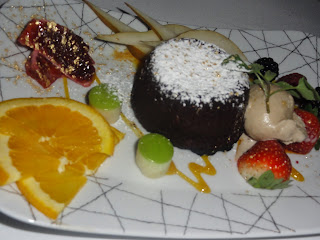 The chocolate was rich and flavorful. Of course it also helped that it oozed out chocolate goodness when I cut my first piece! 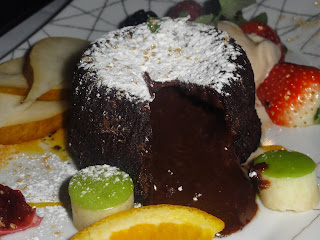 The Ice Cream Medley got high points for presentation and also did quite well on flavor. 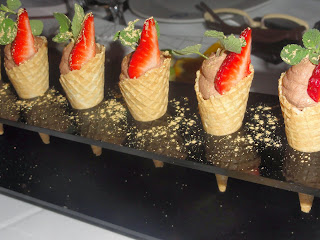 The cones were delicious and not too sweet. The chocolate deliciousness inside was also quite good. The overflow of desserts was the perfect way to end the night.

A decade (and in my case two years) later Thalassa is still going strong. The revamped menu has a lot of options for those who favor small bites, authentic Greek flavors and delicious seafood. The semi-private space downstairs is still an enviable location for a dinner or reception. They've even added live music, which is a classy touch to a top notch restaurant. If you haven't been, now is your chance!