After good times at the spot next door we were famished! The manager or owner of Lupe Cantina stopped us outside and asked our group to come in. We negotiated a pretty good deal and decided to enter. The menu had a lot of options but our table ended up with a lot of repeats.
The Soft Tacos were my dish of choice. 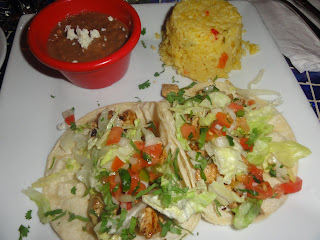 I requested the flour tortillas stuffed with chicken. It included lettuce, cilantro, onions and pico de gallo. I wasn't expecting much but the chicken was surprisingly well seasoned. It was served with rice and beans which only made it better.  Ms. S and her Mr. K ordered the Chicken taquitos. 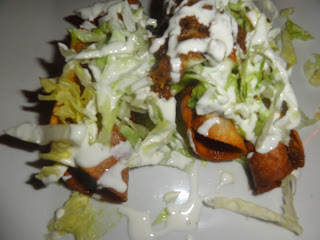 Three corn tortillas rolled with marinated chicken and deep fried.  They definitely enjoyed it. A little crunch goes a long way. Enchiladas were also a favorite at our table. 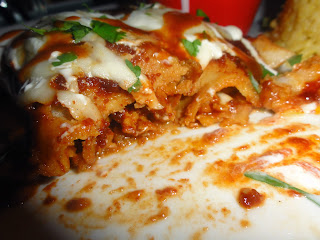 Corn tortillas green or red lupe sauce. It was served with rice and refried beans.  Mr. S ordered the Fajitas. 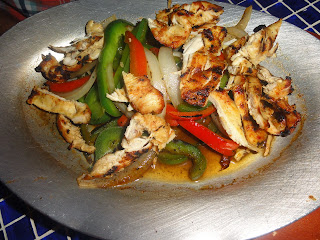 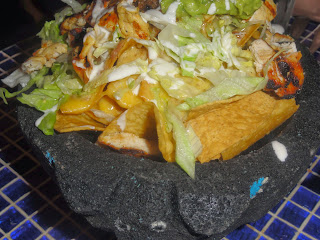 I must admit I had a little food envy when their Molcajete plate arrived.  The homemade tortillas chips were topped with refried beans, melted mozzarella, lettuce, guacamole, salsa, jalapeños, queso fresco and sour cream. Presentation wise, this was definitely one if the better looking dishes that we ordered.
Overall Lupe Cantina was uninspiring. The food was fine but I've eaten a better version of each dish elsewhere. The atmosphere is lively and if you bring the right group of people with you, you could end up staying there for a while. That's exactly what we did.
Hungry yet?