It’s a little embarrassing how long it took me to get to Hill Country Chicken. I mean, I’ve been planning to go for quite some time but just didn’t make it there. I will say after heading to Momofuku for fried chicken last year, I envisioned hitting up all the fried chicken joints I could handle. Mr. M agreed this would be a worthy endeavor and I was psyched. Truth is I’ve been slow rolling, but now I’m feeling a little reinvigorated by our trip to Hill Country.  Ms. O and I had both spent some time looking over the menu in advance so when we arrived, we agreed that the best thing to do would be to get both the Hill Country Classic and Mama Els’ Recipe. 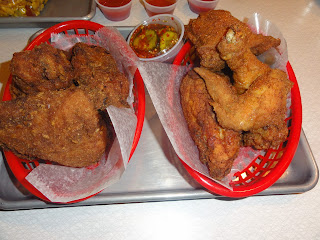 I thought I would be able to pick one as the best or my favorite.  Alas, both were crispy on the outside but moist on the inside. They were both flavorful and fabulous! The Fire-n-Ice Pickles in between were a good addition.  We also helped ourselves out to quite a few side dishes.  My favorite was the Blistered Corn Salad. 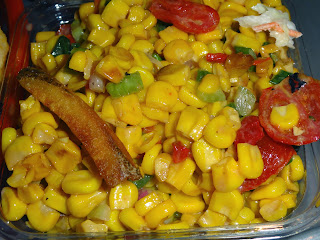 It contained celery, tomatoes, red onions and a little something to give it a kick. Definitely an unexpected treat! The Creamy Coleslaw was also a pleasant surprise. 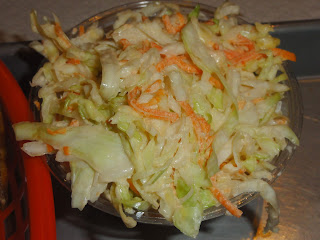 I don’t typically love coleslaw because most of the time there’s too much mayonnaise.  This one was well balanced and the cabbage was crunchy, not mushy.  You can’t have chicken without biscuits! 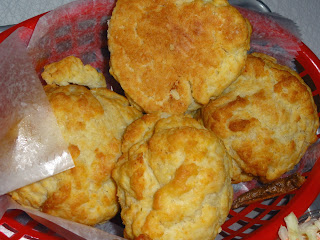 These biscuits were best eaten when warm. As they cooled the fresh flavor remained, but they were at their prime when we first got them.  The French Fries were another gluttonous addition to our meal. 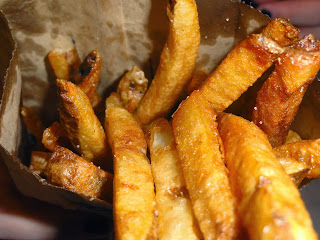 There was nothing remarkable about the fries. They weren’t bad, but they didn’t blow my mind either.  The food at Hill Country is great! The chicken is definitely the star of the show, which makes sense considering the name. But don’t sleep on the side dishes because they are great supporting stars. My only complaint about Hill Country is the basket situation.  Considering how much food we ordered, we could have really used some plates! We picked up a couple of extra baskets so we could use them as plates, but you know what would have been great? Plates! Perhaps they have some and we just missed it, but for the most part it looked like a basket only situation. You should also keep in mind that it's counter service so best to have someone grab some seats while another person gets the food. That way you're not left holding your tray with nowhere to sit.
Hungry yet?