It's not often that I blog about a chain restaurant, but on my last trip to DC I had brunch at Le Pain Quotidien and decided it was worth writing about. I was so excited to finally hang out with Cora and the future Mrs. Cora. We had to wait a bit before our party of 4 could be accommodated. The worst part of standing around was that I could see several of the sweet treats behind the glass. I held out from buying anything while waiting. When we finally sat down my stomach was screaming.  When I first realized where we were going, I was a bit surprised because their menu has never led me to believe they had much more than pastries.  It turns out not all Le Pain Quotidiens are created equal. This one had quite the expansive breakfast menu. (Apparently that's what they do in LA, CT, DC and 2nd and 50th.) We started with Belgian hot chocolate.  I've never had Belgian hot chocolate. They serve you milk in a large mug and give you a small vat of chocolate.  You pour in the chocolate and tada! 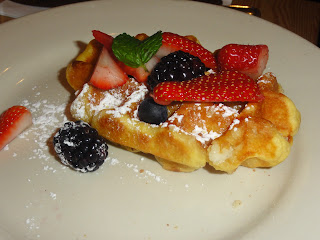 Pretty tiny portion if you ask me, but tastefully decorated with fresh fruit and powdered sugar. I'm guessing CoRa is watching his figure in anticipation of the wedding.  The future Mrs. CoRA also went all healthy on me. 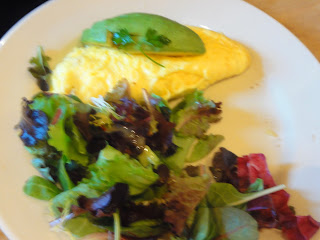 That is an Omelette with Avocado. It wasn't on the menu, but apparently she's got the hook up.  Ms. O order the Paris Ham & Gruyère Omelette. 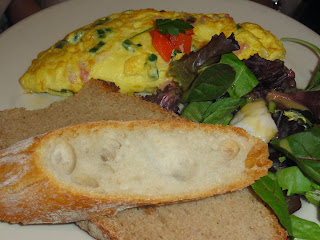 It actually looked pretty good. If not for the ham part, I might have gone for it too.  I decided to go with the Chicken Chorizo & Cheddar Omelette. 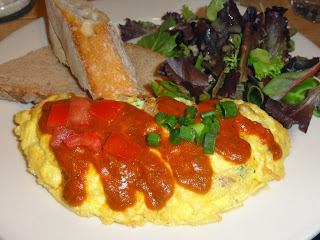 Yummers! The harissa on top was my favorite part! The chicken chorizo tasted great and it was just the right amount of cheese. I'm skeptical of omelettes because they add way too much cheese, but this one was just right.

Overall, it was a pretty good experience.  The wait was pretty bad, but the most annoying part of being in there was the constant reminder of "organic". It was all over the menu, on the servers' shirts, and even the jam. I mean jeez get over it!