After spending several months looking forward to my escape from NY, I was psyched when Ms. O and I finally made it to New Orleans. It is definitely one of my favorite cities in the US. As Tennessee Williams said, "There are three great cities in the US, New York, San Francisco and New Orleans...everywhere else is just Cleveland."

We started with a tour that helped us get acquainted with some of the sites we would return to later during our trip. For dinner our first night, we decided to dine at Muriel's Jackson Square. We were greeted by the hostess and immediately escorted to our table. We had two servers. One person for drinks and another for our food. They take their drinks very seriously in NoLa!

We immediately encountered a problem because the menu had too many great choices!! We decided to order as much as we thought was reasonable. Our first dish was the Creole Tomato and Crab. 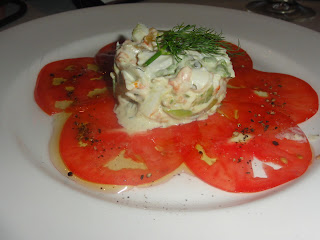 The display was enough to make me melt a little bit. We were there during the height of the Creole Tomato festival. These were some special tomatoes. It was like heirloom infused with an extra level of sweetness and freshness. The jumbo crabmeat was mixed with avocado and tossed in a tarragon tartar sauce. The tartar sauce initially threw me off because it was creamy and reminded me of mayonnaise.  The dish was well balanced but definitely a little rich, which isn't surprising when you mix crab with avocado.  Of course Ms. O ordered a salad. 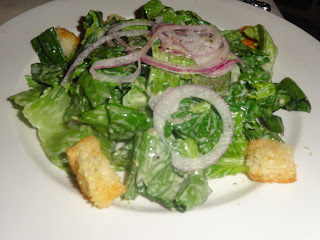 The romaine lettuce tossed with a roasted garlic and Parmesan dressing with shaved red onions and herb croutons was inoffensive. It looked good but I refuse to acknowledge salad as a part of my meal, especially when Escargot is an option. 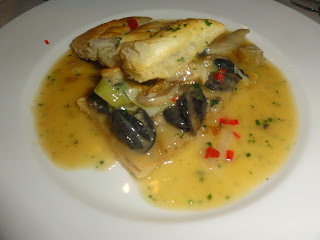 The Escargots Orleans was phenomenal.  The tender escargot with fennel, leeks, and oyster mushrooms simmered in a roasted garlic butter were served in a flaky vol-au-vent shell. Definitely melt in your mouth goodness. The contrast of the buttery snail and the flaky crust made every bite perfect.  As though the appetizers were not rich enough, we went for the gold with our entrées.  Ms. O ordered the pan seared maple leaf duck breast. 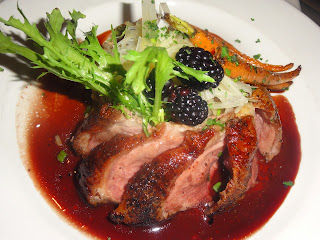 Any one who has read my duck related entries knows how weak my knees get when duck lands on the table. This dish was a double dose because it was served with duck confit dirty rice, leeks and baby carrots with a blackberry gastrique. Holy Moley!! 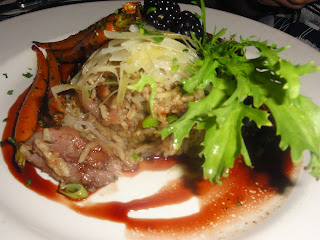 The duck confit dirty rice was the most spectacular rice I have ever eaten. I fully intend on recreating this masterpiece.  I had a little bit of food envy but that was quickly dismissed when my Blackened Redfish arrived. 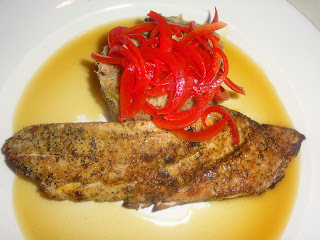 The large filet of fish was a bit intimidating.  It was perfectly seasoned but I especially loved the peppery Louisiana Crab stuffing. The stuffing was moist but not watery. The best bite was the combination of the fish and stuffing swirled in the accompanying Blue Crab butter sauce.

Muriel's you wowed me in a way that I will never forget. I genuinely enjoyed every bite on every plate. My only regret was my inability to finish my entrée.  I will definitely be back next time I'm in New Orleans!!