Sometime last week, our schedules happened to work out and Z and I met up for a last minute dinner. We had scoped out Bocca di Bacco a few times on our random walks down 9th avenue so we decided it was finally time we went in.  The restaurant is fairly large and welcoming - mainly due to its well lit bar area and adjacent communal high table. The rest of the restaurant is fairly dark almost cavernous but in a romantic way.
We were mostly in agreement when it came to the menu.  We shared the Shrimp appetizer. 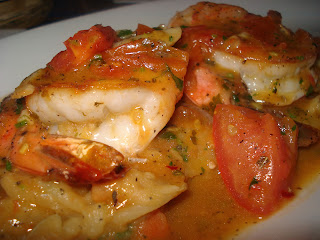 Four shrimp inter connected and flavored with tomato sauce, garlic and a type of legume that I can’t remember.  The flavors were powerful. The shrimp was fresh and while drowned in the tomato sauce it was not overpowering.  I used the bread to soak up the sauce because it was just that good.  The service was sluggish but eventually our entrées arrived.   Z ordered the Coda Di Rospo Livornese. 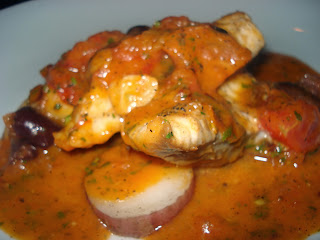 Pan-seared monkfish with tomato sauce, kalamata olives and potatoes.  The monkfish was delightful! It was covered in a tomato sauce that was similar to the sauce used for the shrimp. YUM!  My carb heavy entrée was amazing. 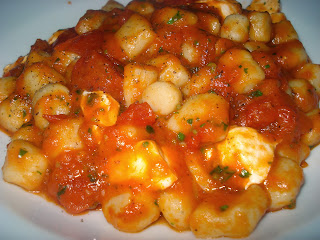 The Gnocchi Alla Sorrentina was perfect.  Light potato gnocchi, fresh chopped tomatoes, basil and buffalo mozzarella.  My mouth is watering just at the thought of it. The portion was large enough that I ended up taking the rest home. I had planned on eating it for lunch the following day, but I just couldn’t resist! I ate it within a couple of hours of getting home.   Just because I didn’t finish my entrée, doesn’t mean I didn’t have dessert! I ordered the Warm Chocolate Souffle. 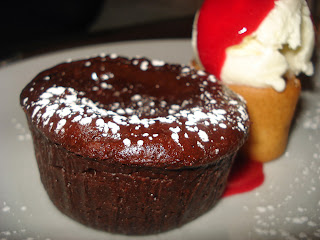 It was served with Vanilla Ice Cream and a raspberry sauce.  The Souffle was okay – but not worth writing home about. The ice cream was also less than. Overall, I probably should have done without the dessert.  The service at Bocca di Bacco was also not spectacular.  They had several waiters who were standing around doing nothing.  I appreciate when restaurants give their patrons lots of time to enjoy the meal, but they didn’t even let us order they just stood around until we called them over.
The food at Bocca di Bacco was good, but a little pricier than necessary. I’d definitely go back – but probably on someone else’s dime. :)
Hungry yet?