As always on a Friday few things make me happier than a great meal! I know not that different from other days ;-)
A few Fridays ago, KOI was the location of the great meal. I must admit I wasn't thaaaat excited because I had heard that the NY location doesn't live up to the LA location's hype. Regardless, I figured it'd be a fun dining experience.  Our server tried to push Edamame on us before we evaluated the menu.  Never one to be suckered, I had no problem saying no.  Instead we ordered the Edamame Dumplings. 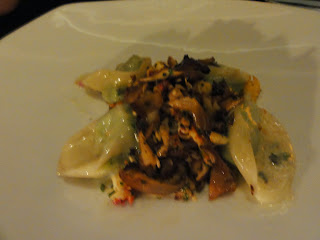 Delicious little pockets filled with edamame and served with a mix of black truffle, lobster and lemon-thyme sake butter.  (Apologies for the pictures still figuring out the settings on the new camera.)  We also happily ordered the Creamy Rock Shrimp Tempura. 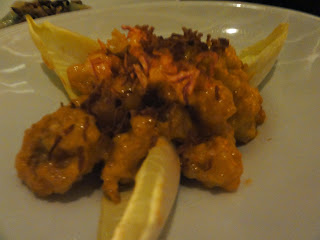 I initially saw creamy and hesitated but the slightly spicy sauce was perfect. It worked well with the crispiness of the tempura and the freshness of the shrimp.  I was a little suspicious when the Crispy Rice with tuna arrived at the table. 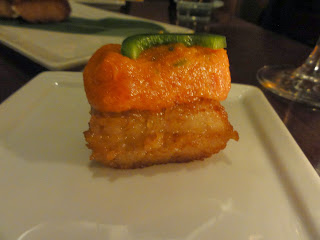 However, one bite and I was hooked! Tightly packed rice deep-fried for a nice crispy shell but moist inside. Of course the spicy tuna was the star of the show topped with a small slice of jalapeno.  YUM!  It was definitely my favorite, but the Baked Crab came in a close second. 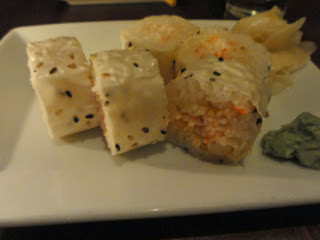 Warm pieces of crab with rice…I mean what could go wrong? Absolutely nothing. It was sensational.  The crab was well flavored and the warmth was a pleasant surprise.  The biggest disappointment of the night was the Koi Dragon Roll. 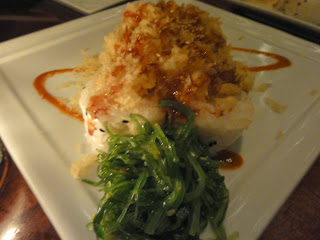 It looks messy which was my first clue that I wouldn’t like it.  Allegedly there was shrimp tempura and eel inside that big pile of rubbish.  However, all I experienced was bits of tempura dumped all over the roll. GROSS.  I had one piece and asked for a do over.  We were already full though so we ended up just moving on to dessert, which was much more pleasant. The Warm Chocolate Brownie Banana Sundae with Vanilla Ice Cream (sans Banana) was spectacular. 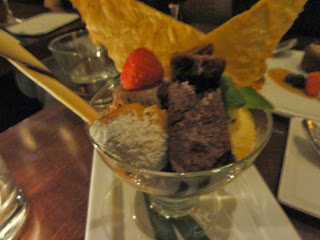 Quite the presentation and it tasted incredible.  The brownie was chocolate heaven and a bite of ice cream made it that much better.  Wowee. I also had to sample the Warm Molten Chocolate Cake. 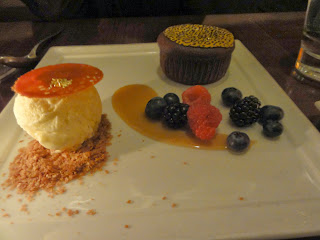 The presentation was even better than the chocolate cake. I liked the cake, but was happier with the brownie. I think I’ve had a little too much cake these days ;-)
Overall Koi was a good dining experience but nothing spectacular.  Although none of the entrées really wowed me, I’d come back for a bite of the Crispy Rice and the Rock Shrimp Tempura.  The dragon roll was so disappointing the bad taste stayed with me for longer than I would like.  If you must go to Koi, skip the Dragon Roll and double up on the Crispy Rice. The desserts were great, but not enough for a return trip. The company was of course fabulous and totally made the dinner worth it :)
Hungry yet?