I’m still sans kitchen and bathroom and am currently living in a hotel. Yup, it’s true. I will review the hotel once I return to my space and I’m hoping that an end is near.  My lack of kitchen means many more out of home dining experiences. While I normally take great pleasure in dining out, I must say that I am sooo over it and just want my kitchen back!!  During my first week at the hotel – that’s right I’ve been here more than a week – I was able to catch up with Ms. R and Ms. S for dinner at Melba’s.  I’ve been meaning to try it so I’m glad I finally got the chance.
I was quite shocked at how tiny the restaurant is – it probably seats about 40 people.  Our server was an Amber Rose lookalike who apparently has been working there for a few years.  It took quite some time before she brought water to our table so she immediately received demerits from me.  I was famished so ordering was not a problem.  Ms. R was kind enough to suggest that we order the Catfish Strips with Chipotle mayo as our appetizer. 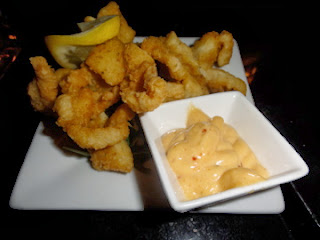 The strips were excellent. Lightly battered in a well-seasoned mix it didn’t taste greasy. I could have done without the chipotle mayo though.  Absolutely nothing special about it and it actually took away from the deliciousness of the strip.  The appetizer was just a warm up to my Catfish Dinner. 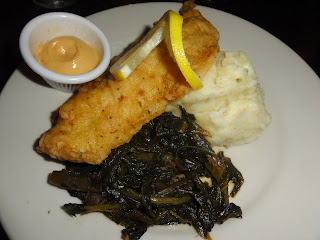 I ordered it with a side of collard greens and mashed potatoes.  The Catfish tasted just as good in large form as it did in strip form.  The collard greens were salty! Pfft. Amy Ruth’s definitely wins that battle. The mashed potatoes were flavorless which was unfortunate because I was really looking forward to them. They didn’t taste like instant potatoes thankfully, but they also were not delightful.  Ms. S ordered the Pecan Crusted Tilapia. 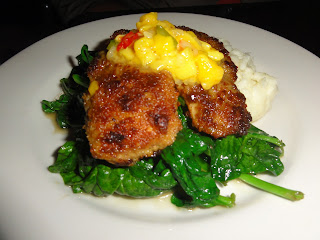 Upon its arrival I immediately had food envy. Her bright green spinach was better looking than my lifeless over salted collard greens, but alas it was undercooked! The stems tasted as though they belonged in a salad. Another 45 seconds and these would have been excellent.  Her side of mashed potatoes was equally tasteless. The tilapia on the other hand was marvelous.  Light and flaky on the inside yet it really took well to the pecan crust – though I didn’t really notice the pecan flavor. It was topped with what tasted like a mango salsa but something was slightly off so perhaps I'm mistaken. I will definitely be recreating this dish once I get my kitchen back! I was glad Ms. R ordered the Chicken Dinner because after the collard greens I decided I was keeping score between Melba’s and Amy Ruth’s. 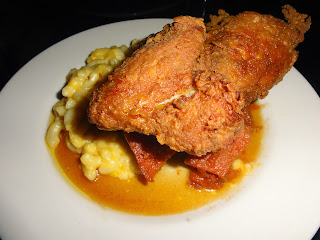 The chicken was very moist and really really flavorful. IMHO it slightly edges out Amy Ruth’s.  The mac n cheese was good enough for me to go in for a second scoop – and I don’t really get down with mac n cheese.  The yams were diabetes inducing. Just way too sweet! I mean sheesh it’s a side dish not a dessert!
Overall I was pleased with the meal at Melba’s. I love dining with friends, especially when they order things that I can sample. I’d go to Melba’s just to say you did it, but don’t expect to be knocked out by the entire experience. There are some highlights but there are definitely lowlights. I would have loved to try the dessert but nothing really appealed to me.  I’ll likely go back at some point, but with all these options in the area, it’s not likely it’ll happen too soon.
Hungry yet?