One of my absolute favorite parts of warm NY days is outdoor dining! I also love the way warmth garners spontaneity. So last weekend while the sun was shining bright, I sat around in Union Square reading. Since I was already that far downtown, I figured why not go see my favs who live WTFDT (hehe). Mr. M was on his way out but Ms. O was on her way in so I hustled to their apartment and saw them both!  Then Ms. O and I headed out to the Seaport in search of some good eats.  We decided on RED because the menu had enough items on there that sounded tempting.  Our eyes both zoomed in on the Fiery Chicken Wings so I was thrilled that they soon appeared on our table. 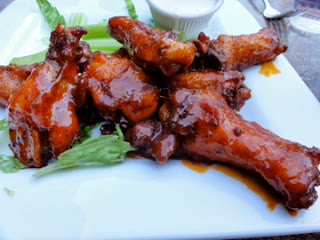 They were awesome! They were definitely marinated in a delicious sauce which for some reason I thought had hints of buttermilk but turns out it was bleu cheese - close enough. We were very happy with the flavor and the fieriness of the wings.   Ms. O ordered a salad. 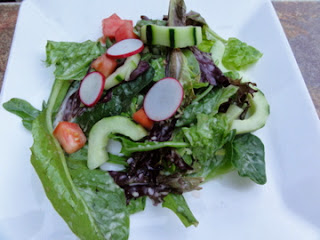 She was pleased with the dressing but the server definitely lied about the size of the salad.  I ordered Chicken Tacos. 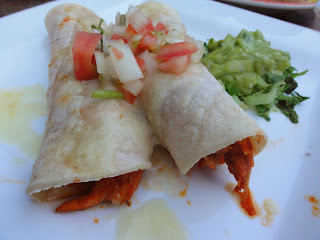 I was very excited about the tacos, but sadly they did not meet my expectations.  The chicken was pretty well seasoned but a little bit of salt would have gone a long way. Generally, corn tortillas don’t do it for me – these were mad worse by the dry cold cheese that fell across them. The suuuper runny guacamole didn't help the plate either. The rice and beans were tasty though. 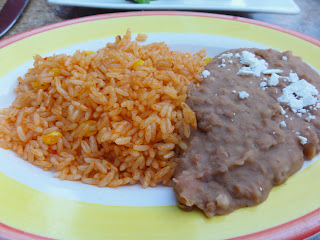 Refried beans are awesome and every time I eat them, it takes me back to my days at UMD and the delicious burritos at Jalapeno Grill. YUM!
RED was not the best Mexican food I’ve had. The service was subpar and at one point our regular water was replaced with flat seltzer. I don’t know who goes around carrying a pitcher of seltzer but something definitely went wrong there.  The wings were delicious and had we stuck to our original plan of appetizers we would have definitely won. Alas, my eyes are too big and when I see food I can’t help but want to eat it. I recommend the wings but not much else.
Hungry yet?