I've been trying to get a little more variety in the types of cuisine I try when I go out to eat. So when blackboard eats had a coupon for Do Hwa I quickly grabbed the offer. Of course Bestie is always willing to try new places with me so we happily venture to the Korean restaurant.

Located in the village, it was a bit of a hike but on a convenient subway line so it was an easy trip. We walked into the dimly lit restaurant and were initially in the bar area which is separate from the main dining room. The hostess is on the other end of the bar so the poor set up was initially confusing. Once we got past that part, we were seated at the best table in the house. We happily settled in then attacked the menu. We were in agreement about ordering Mul Mandu to start. 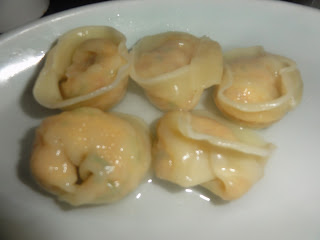 The home-style boiled kimchi and shrimp dumplings were incredible. They were stuffed full of shrimp and kimchi. They had a spicy kick at the end of each bite. The dumpling wrapper was extremely light and there was never a point where I felt I was eating wrapper with no filling. I was truly sad when I ate my last bite because it was just that good. While we were waiting for our entrees, our sides arrived.
The entrees are served with seasonal side dishes. It was quite the spread that they brought out for us. 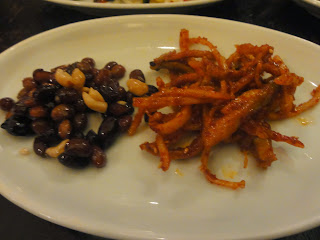 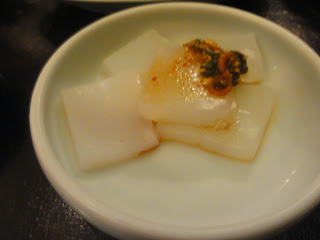 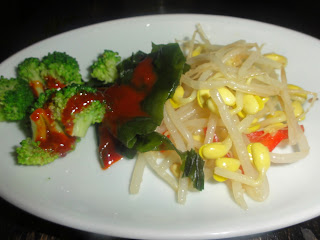 then of course the cabbage and kim chi. 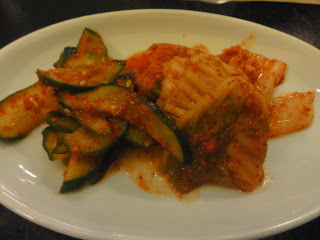 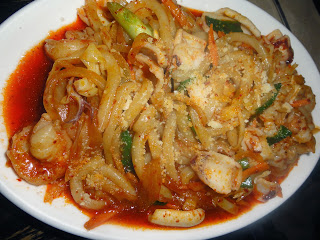 Those sautéed udon noodles with shrimp and squid can be made spicy or not.  Obviously she chose spicy. The udon was remarkable. They were buttery goodness and definitely left sweetness to the spice. The shrimp tasted like it was just plucked out of the ocean, as did the squid. I definitely had a case of food envy!
My entree the Dak Dori Tang eventually arrived. 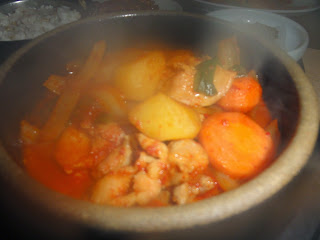 The chicken stewed in chili sauce with potatoes and carrots was spectacular. They used dark meat, which made all the difference because the stew was quite filling and I actually ended up eating the rest the next day and it was spectacular.
We were stuffed silly by the time we finished so we couldn't even head across the street to Sweet Revenge. They did give us a slice of a Blood Orange to wrap up the meal. 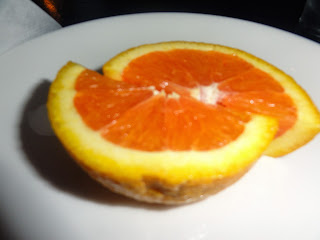 The meal was incredible. When most people think about Korean food they think about BBQ. While Do Hwa does offer BBQ, you shouldn't feel limited to just that part of the menu.