After Bestie came over a few weeks ago, she was appalled by the lack of food in my fridge so she was kind enough to drive me to the grocery store. I took the time to buy some ingredients for a recipe I wanted to try.  I was flipping through my Food and Wine magazine when I saw the recipe for Gingered Salmon with Grilled Corn and Watercress Salad.  Something about slivers of ginger stuffed in salmon just sounded so good, and even better when I realized it would be cooked on a skewer! Although it was delicious, I made a few mistakes with this one. I’ll point them out and let you know what I would have done differently. 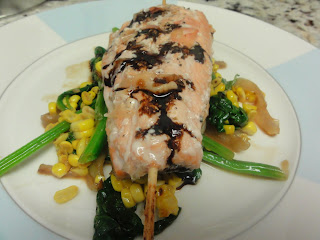 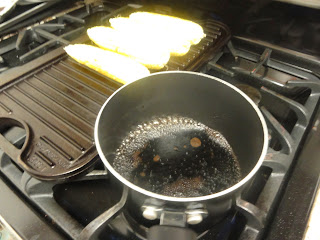 Let it cool. Using a serrated knife cut the kernels from the cob.  Arrange the salmon fillets skin side down. Using the tip of a sharp knife, make five ½-inch-deep slits crosswise in the flesh of each fillet. Stuff 1 slice of ginger into each slit, then thread each fillet lengthwise with a short skewer. 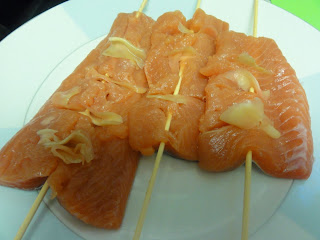 The first error I made was buying such thin slabs of salmon.  Although this was fresh Atlantic and tasted amazing, I should have opted for larger pieces even if it was previously frozen.  This made it difficult to cut slits deep enough to stuff the ginger and still have room to stick the skewer through.  The next step requires a large, ovenproof skillet. Another mistake! I really need to buy an oven-proof skillet. IMMEDIATELY! Shame on me. 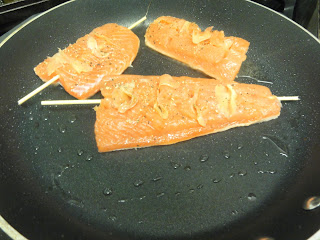 Well, you’re supposed to heat 1 tablespoon of canola oil on the skillet. Season the salmon with salt and pepper and add the fillets to the skillet skin side down.  This was fine until I realized that my skewers were too long! I had to snap them while cooking which was awful. Cook the salmon over moderately high heat until the skin is lightly golden.  That part I got right! 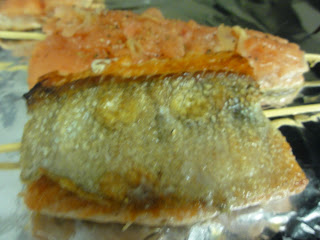 You’re then supposed to put the skillet in the oven and roast the salmon for about 6 minutes, turning once halfway through.  I put the salmon in the oven but shouldn’t have turned it over! It left the fish looking very unattractive.  While the salmon was cooking, I quickly put the spinach in a hot pan with garlic and onions until it was wilted. 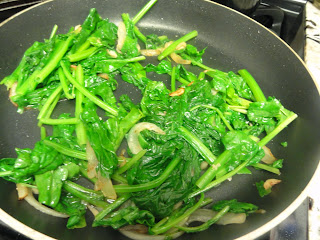 In a large bowl, whisk the remaining 2 tablespoons of balsamic with the mustard and honey.  Gradually whisk the remaining canola oil into the dressing.  Add the corn and the spinach to the bowl and toss to coat.  Transfer the spinach and corn to the plate and top with skewered salmon.  Drizzle the fish and salad with balsamic reduction and serve immediately.

Overall the recipe turned out great. I opted for spinach and I wouldn’t call that a mistake, but I wills ay that because it wilts so much, I really should have had more spinach than I used. I had tons of left over dressing!  It was delicious though!
Hungry yet?
Posted by Lady T at 11:49 PM