After celebrating Ms. O's birthday in style the night before, I woke up famished. Thankfully we had already agreed to head to Stone Street Tavern for brunch. While sitting outside was an option we decided to stay indoors and enjoy a little of the air conditioning. The brunch menu has a lot of options and they had an additional menu with some specials. After spending a little time with the menu, we were ready to order. Considering the size of our group, our food arrived pretty quickly. Unfortunately, it was riddled with errors.
Mr. J ordered the Stuffed French Toast, which he had been raving about since the night before. 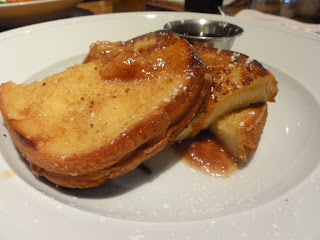 He knew immediately that there was something wrong with it. Turns out they sometimes stuff their French toast with bananas. That's called Bananas Foster French Toast. Mr. J's order was corrected and this arrived. 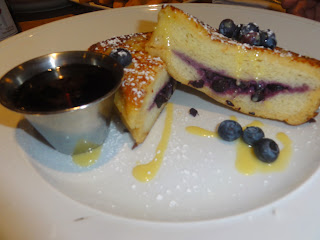 Yup, definitely what he wanted. Blueberries, mascarpone and vanilla sauce. That's what he signed up for.  Mr. M and the elder Ms. O ordered the Huevos Quesadilla. 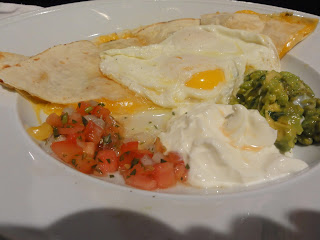 The quesadilla was filled with cheddar jack cheese, jalapeño, pico de gallo, guacamole and sour cream. It also was advertised as coming with a fried egg. The egg was barely fried it was running all over Mr. M's plate. The waitress told Mr. M that the quesadilla was served with steak fries. Lies!! No fries were delivered. Ms. O's Hangover Burger was served with fries. 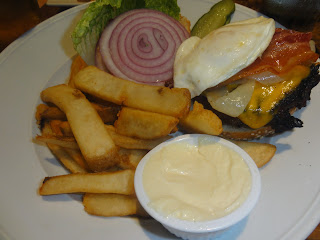 The burger was filled with cheddar, bacon, fried egg and onions. Ms. O also asked for mayonnaise and hollandaise. Our waitress forgot - shock! Mrs. A ordered the Omelette Special. The spinach, tomatoes and goat cheese were what made it special but she asked them to hold the goat cheese. It looked really good and I definitely had some food envy. 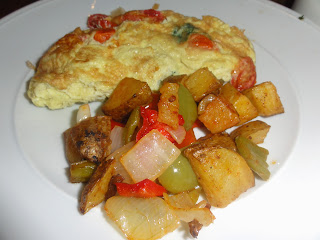 Mr. A ordered the Bacon Egg and Cheese sandwich. No cheese of course. He seemed to enjoy his sandwich. 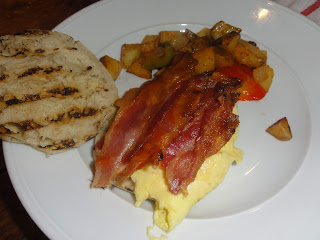 I ordered the Salmon Scramble. I asked for no cream cheese. 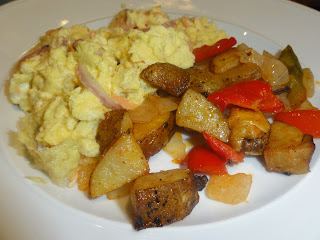 Of course it was served with cream cheese. The waitress was just not on it. I would put her name out here but I'm hoping it was just an off day. It was also just way too salty! I could barely stand to eat it. The home fries were good though. The company was great so the meal was worth it. If they got our orders right it would have been even better. They may have just been punishing us for sitting inside instead of out.  Overall I can say I was definitely underwhelmed, not whelmed and definitely not overwhelmed.
Hungry yet?