Ms. H is finally making the big move to NYC. She came apartment hunting and brought Mrs. H with her. I was fortunate to miss out on the apartment viewings but still be included in the post search dinner. When they selected Brazil Grill for dinner I was even more excited considering Mrs. H is an expert in the cuisine. The menu had a lot of variety and I had a difficult time deciding. Luckily Mrs. H took the lead and we started off with Salgadinhos Fritos, which was a mix of fried goodies. 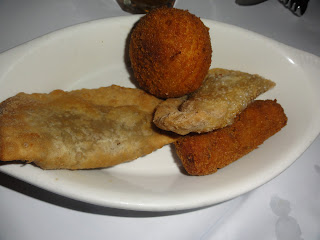 The Coxinha was a fried ball filled with magnificently delicious shredded chicken. 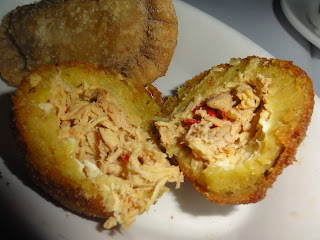 The Cod Fish Croquets were also well flavored and tasted great. I didn’t sample the Pastel. It is a pastry shell filled with ground beef or cheese. For my main course I ordered the Bobo de Camarao. 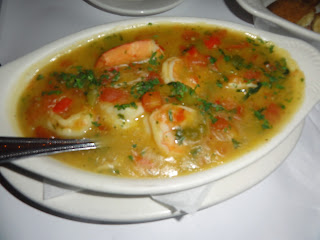 A delicious bowl of sautéed shrimp in palm oil, coconut milk and yucca sauce. The sauce was very flavorful. There were many different spices. I was initially skeptical of the combination of palm oil and coconut milk but it turned out just fine. I was a little annoyed that my food was sitting under the heat lamp long enough to form a slight film. bah! I also had food envy when Ms. H's Muqueca de Peixe arrived. 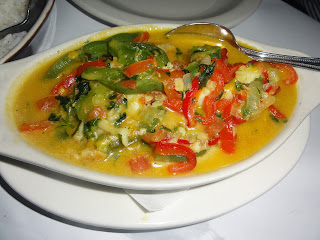 The Brazilian fish stew was a mix of coconut milk and dende oil in tomato broth. The aroma alone was enough to make my mouth water. The fish tasted great. The rich flavors of the stew had definitely seeped into the fish and they were one. Mrs. H ordered the Picanha Na Chapa. 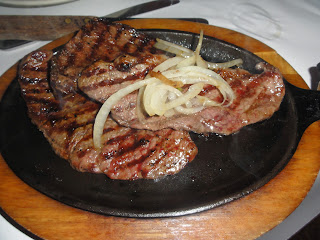 Apparently, it is Brazil's national meat dish. It consists of slices of top sirloin steak served in a sizzling pan with caramelized onions. She commented that this is the best cut of meat because it is a mix of flank and sirloin. She really enjoyed it and Ms. H sampled a few bites. Our dishes were served with white rice. We also had beans, French fries and fried bananas. Wow what a meal. The only drawback was the very hands off staff. I had to beg before my water was refilled and I guess since they know their food is good, no one stopped by our table after the food arrived.
Brazil Grill is delicious and with such an expansive menu I look forward to returning so I can try something new.
Hungry yet?