I've been debating how to write this review. I was so excited to go to Cipriani -Wall Street with Ms. O but it turned out to be an extremely strange experience. Our server was a bit spacey and repeatedly forgot whatever he was supposed to do. When we reviewed the menu we were both disappointed to find that items we had planned to order were not on the menu! Argh.  We reluctantly started our meal with an order of Fried Calamari with tartar sauce. That was the largest order of calamari that I've eaten. We served ourselves two or three times and still had leftovers. The calamari was delicious but not spectacular. I should have known then that things were not right.  I was really craving pasta but decided that the Gnocchi alla Romana with tomato sauce would be my best bet. 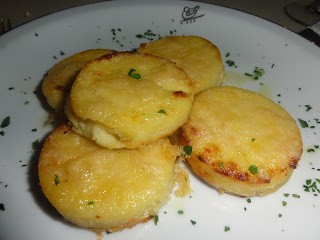 Yea, that is allegedly gnocchi. I was incredibly disappointed, but decided I should at least give it a chance and taste it. It was not gnocchi. The inside was cheesy and the outside was crunchy. It lacked any real flavor on its own but the sauce that they served with it was great and made the meal tolerable. 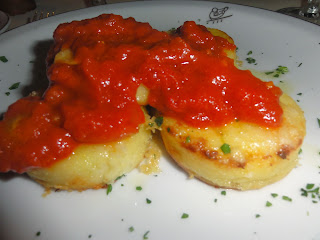 I ate two of them and couldn't stomach it anymore. Ms. O had far more success with her Breasaola. 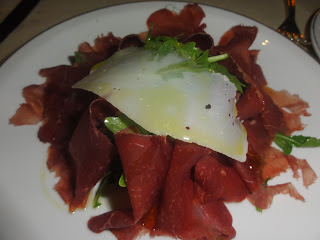 It was served with arugula salad and shaved Parmesan. She enjoyed it but the portion was pretty small and the salad was really just arugula. The saving grace was the Broccoli Rabe. 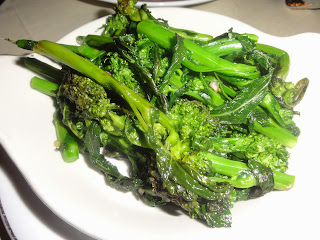 It was crunchy and quite delicious. I was so glad Ms. O ordered it because I definitely took bites between my fake gnocchi.
Cipriani Wall Street is not at all what I expected. Their staff is awkward and the food is not what you expect, which can sometimes be a good thing. It's worth the trip just for the beauty of dining in such a magnificent space but I'd recommend reviewing the menu before you go in.
Hungry yet?