I love when my friends visit! When Mr. S, Ms. S and her Mr. K showed up a few weekends ago, I was thrilled.  We had a great time that weekend.  After a very late dinner on Friday, we went down to good for brunch.  We only waited a couple of minutes before we were seated.  That was enough time for us to notice the simple décor, which included photographs of utensils.  Mr. S claims that the furnishings are likely old items from an antique store.  The brunch menu at good is incredibly expansive.  We decided to each order the goodBrunch special.  Mr. K started with the Hand-rolled orange sour cream donuts. 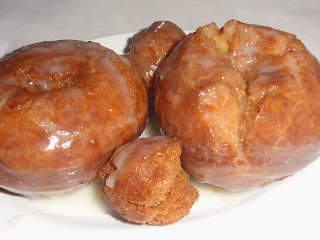 Holey donut!! The donut holes were delicious! They were very sweet, but a delicious natural sweetness thanks to the flavor of the orange.  I was fortunate that Mr. K forgot the other donut when he left so I was able to enjoy it on Monday morning.  For his main course, Mr. K ordered the Basil & Goat Cheese egg scramble.  It was served over sourdough cherry tomatoes, asparagus and pesto. 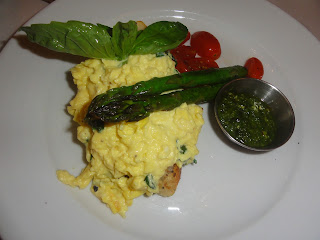 Quite the healthy alternative considering he just ordered donuts.  If not for the goat cheese, I probably would have ordered this too.  Ms. S ordered the Savory Cheddar Cornbread. 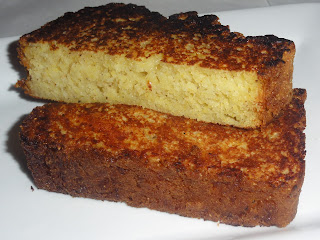 Yummers! The cheddar was thankfully not overwhelming. The bread was served warm which also added to its deliciousness.  It was crispy and had a little kick baked in.  For her main course, Ms. S ordered the special. Baked Eggs with gruyere and spinach on sourdough bread. 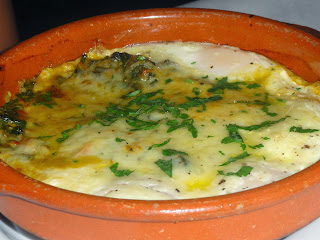 Props to Ms. S for getting through the entire plate. I’m pretty sure she ate half a dozen eggs.  Mr. S ordered the Banana Cream Cheese Stuffed French Toast. 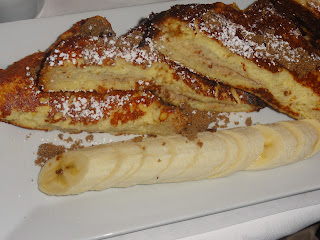 He destroyed that beast, but he didn’t quite make it through the bananas.  I ordered the Migas.  It’s scrambled eggs with crisp corn tortillas, onions, peppers & cilantro spicy salsa.  This my friends is a first, I was so caught up in the many plates and glasses on the table that I actually forgot to photograph my own food!  I know, wild.
Truthfully, they didn’t look that great anyway so it’s probably best I didn’t photograph them. Haha.  They tasted alright though. They were a little lacking in kick considering they are supposed to contain spicy salsa.  We also ordered Chicken Sausages. 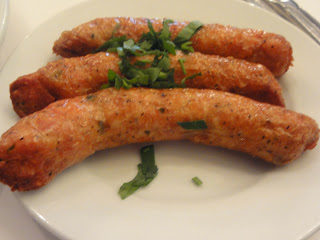 They were wrinkly but very delicious.  The Spicy Home Fries were excellent.  Not as stewed and tasty as others, but they were still an excellent compliment to the other items on the table.
Good was great! Having my friends in town is always such a treat and the way we eat it’s even better!
Hungry yet?