A little over a year ago, Ms. P (of Banana Bread fame) came to town from her temporary exile in Texas and introduced me to Szechuan Gourmet. The szechuan spot in NYC. Ms. P was back in town this past weekend and a group of us met for another fantastic meal at SG. Ms. P practices her Chinese while ordering so I asked her to call out the numbers so I could try to get down exactly what we ate. I was only partially successful. I hope that she, or any of the other diners will correct me if I misnamed anything. We ordered a lot of food, so bare with me as I go through this mostly in the order they arrived.  The first was a number I didn't hear but apparently it was Cellophane noodles with White Peppercorn and Spinach. 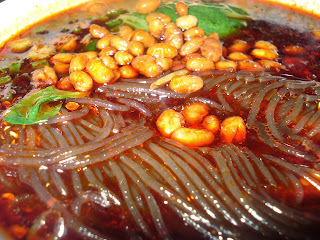 It goes without saying that it was spicy, I mean come on it's szechuan.  However, it wasn't just the spice that I tasted, the noodles were amazing! I am not sure I've ever had those kind of noodles before, but I instantly fell in love. I went back in for several more bowls as did my co-diners. In fact, we ended up asking for the rest to stay at our table so we could use it as a sauce for other dishes.  The next dish to arrive was  #16 Smoked Tofu Shreds with Asian Celery. 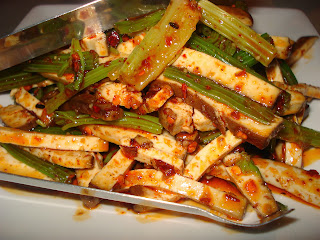 I won't lie I thought about just hitting pass on this one, and in fact that's what I initially did. But then I figured, it's on the lazy susan and I'm hungry so why not spin it my way. I started with a couple of pieces of celery. WOW. It tasted crunchy, fresh, almost refreshing even. Tofu is not on my list of favorites so I took a small bite and decided I would stick to the celery. Fantastic! I was definitely sad when that ended. The Pea Shoots arrived next. 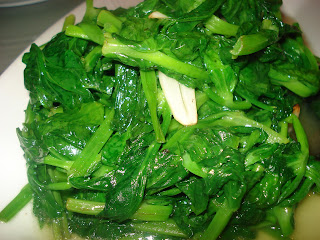 They barely got any love from the table, not because we don't like vegetables but because there was so much else for us to eat. I mean come on the String Beans showed up almost at the same time. 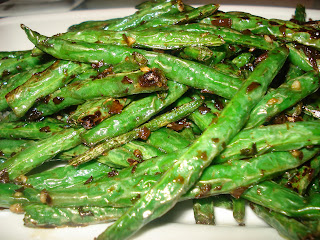 String beans are a classic and definitely very delicious, but hands down the consensus favorite was #97 the Stir Fried Sea Scallops with roasted chili peanut. 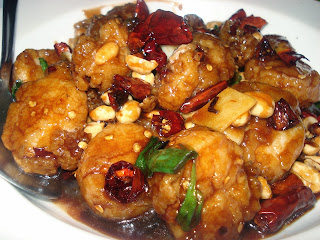 I must admit when they first arrived I was a little skeptical. I usually like my Scallops Seared but man these scallops were incredible! They were bursting with flavor.  I could actually taste the scallop and the slightly crispy layer was light enough that I didn't feel like I was eating fried food. The off the menu Szechuan Pepper Chicken (I think I just made up that name) was AMAZING! 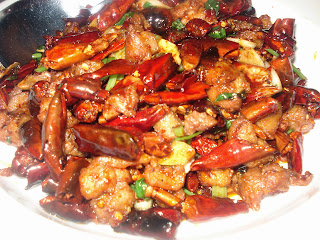 The bite size pieces of chicken are incredibly spicy. The dish mostly consists of peppers so you have to be a little careful when digging in. Mr. W almost had an incident when he dove in too fast with his chopsticks but luckily his reflexes kicked in quickly enough to get rid of the pepper. Although Mr. K didn't want to "hear about how good the animal flesh is" I couldn't help but raaaave about this dish. #91 was the sleeper hit of the table. 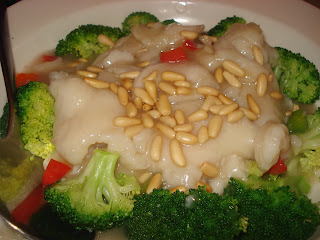 Braised fish fillet with sweet vinegar sauce. I must admit I had my reservations about eating something so pale at a szechuan restaurant. However, the lack of spice did not affect the excellent execution of this dish. The fish was moist and the sweet vinegar sauce was a refreshing alternative to the heat from the other dishes. The Lamb Chili Cumin probably brought the best aroma to the table. 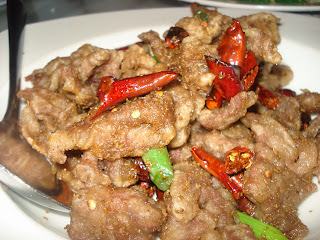 Sometimes I think cumin should come as cologne. I could follow that scent all day. Most at the table were in agreement that the lamb was extremely flavorful. I was only able to appreciate the scent not the taste. The late arrival to our table was the most colorful addition. 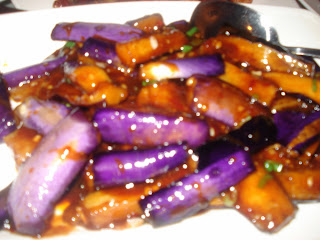 The Eggplant showed up well after I had tapped out of the meal. Luckily, Ms. D and Ms. P went all in so the eggplant was not ignored.
Oh Szechuan Gourmet you really are a gem. There is another outpost on west 56th which is close to my office so take out is a possibility. But I must admit this is a restaurant that is best when multiple dishes are shared and friends as fabulous as mine are at the table. 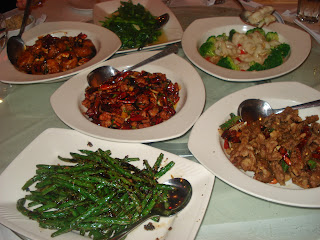 But I don't think I can wait another year to go back to Szechuan Gourmet. Hopefully Ms. P's return to NYC is only a few months away!
Hungry yet?