After a rather disappointing dinner at Al di La, I refused to leave Brooklyn with a bitter taste in mouth. So to make things sweeter, we decided to head to The Chocolate Room for dessert.
Apparently it's usually packed so we were thrilled when we got a seat within a couple of minutes. As much as I love dessert, I'm usually disappointed because it is only one course of the meal. So imagined how excited I was when this arrived! 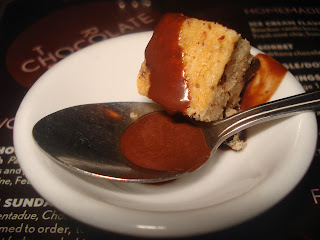 To think, they figured out how to expand dessert by offering an amuse bouche. Brilliant! The Chocolate chip Almond cake was delicious! The chocolate was rich and the cake was light so it was a match made in heaven. Eventually we had to order our desserts. So many chocolatey options I had a hard time deciding. MM ordered the homemade Belgian Chocolate ice cream with chocolate nibs. 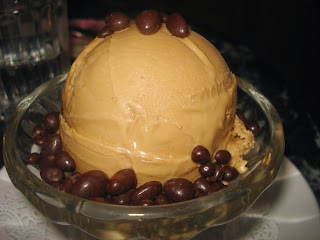 BTW nibs are apparently something like coffee covered in chocolate. Like MM really needs more coffee! I ordered one of my favorite desserts ever. 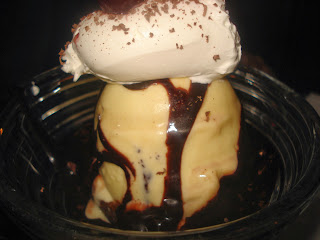 Brownie sundae warmed to order with vanilla bean ice cream, hot fudge and whipped cream. You can barely see the brownie but it's down there, I promise. There was a time when I would order this as my entree and get a side of mashed potatoes. I kid you not. This particular brownie was chocolate at its best. The cold ice cream cut through the warmth of the brownie with the whipped cream adding a touch more sweetness. Delightful!!  Ms. Y and Mr. A also ordered the brownie sundae but they went with fresh mint chip. They definitely enjoyed their dessert but it was clear the vanilla bean was a better mate for the brownie. 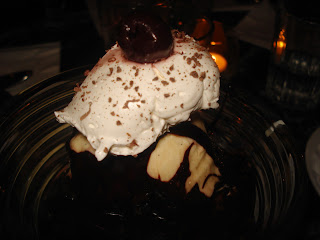 The cherry is kinda sour so be careful! So much goodness at The Chocolate Room. I’ll definitely be back. I highly recommend it for anyone who even thinks they might like chocolate a little bit. Although if you're not interested in chocolate that's fine, it doesn't want you either.
Hungry yet?