After rescheduling several times, I finally was able to meet up with Ms. J for dinner tonight.  It's also Ms. F's birthday so we got together with a few people for a celebratory dinner.  I couldn't wait so I had already eaten dinner by the time I met them at Cabana,

While all the adults at the table ordered proper entrees, I ordered DESSERT! 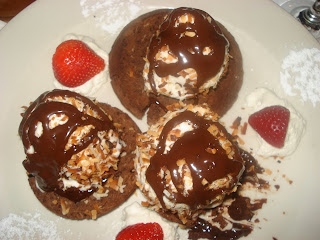 These monster sized brownies were served with ice cream and coconut flakes. 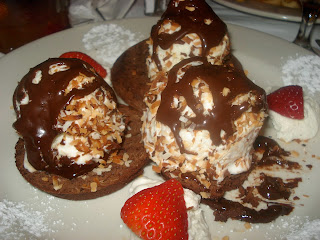 It was delicious! Unfortunately, the brownies weren't that warm, but they were pretty tasty.  I wish I had pictures of all the entrees, but I wasn't thinking about snapping pics while eating the brownie.  I did manage to get a picture of Ms. F's Arroz con Pollo. 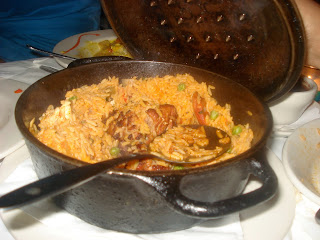 Yup that's a POT.  She was served one regular sized plate of arroz con pollo and then along came a pot.  Pretty much everyone's meal was massive.

If you got o Cabana, you should keep in mind that the portions are ridiculously large.  Seriously.  You should consider sharing an entree or be prepared to carry home some food with you. I can't comment on the entrees, but hope to go back some day and sample the cuisine.