Although we had to reschedule our date night from earlier in the week, I was thrilled that Ms. S was available for dinner and willing to come to my home!  I struggled a bit with what to make.  I really wanted to use my slow cooker but the only recipe I wanted to make was jambalaya.  Mr. G noted that this was cliché since Ms. S hails from Louisiana.  So I decided Lasagna would be better and I would save jambalaya for later this week.  Unfortunately, Ms. S cancelled at the last minute – oh the woes of being a lawyer.
I still had a hankering for Italian and was determined to cook last night since I’ve almost gone through my food budget for the month.  Lasagna was a bit much considering it’s just me so I decided on Stuffed Shells.  I’m really trying to portion better so I waste less considering I’m usually cooking for myself.
To that end, I decided to only make half the box of shells.  In the end, I still ended up with enough to feed a family of 4.  Someday, I’ll learn.  Anyway, details below…
Jumbo Shells with turkey and cheese filling (adapted from the ronzoni jumbo shells box)
½ lb ground turkey
½ box jumbo shells cooked (approx. 21 shells)
15 oz. jar of ricotta cheese
1 cup (8 oz.) shredded mozzarella cheese
¼ cup grated parmesan cheese
1 egg
1 tsp thyme
1 tsp basil
1 tsp salt
1 tsp ground black pepper
¼ tsp nutmeg
1 tsp crushed red pepper
1 jar spaghetti sauce
Brown turkey and add ½ tsp of each spice, except nutmeg.  Drain and remove from stove.  In medium bowl, stir together cheeses, eggs, spices and ground turkey. 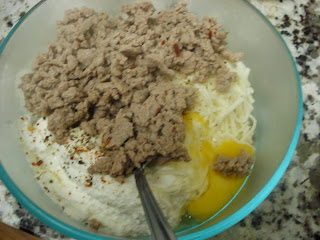 In medium size baking dish, spread half of spaghetti sauce on the bottom of baking dish.  Fill each cooked shell with one heaping tablespoon of the cheese and turkey mixture; layer the filled shells in the prepared dish.  Spread most of the remaining sauce over the layer of shells. 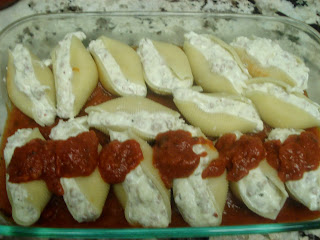 Add any remaining shells on top then spread remaining sauce over shells. 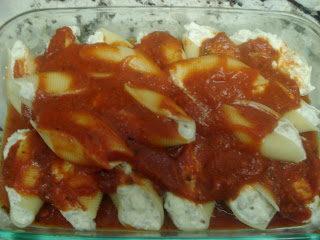 Sprinkle with additional mozzarella cheese.  Cover with foil; bake 30 minutes or until hot and bubbly.
Remove from oven and this is what you’ve got 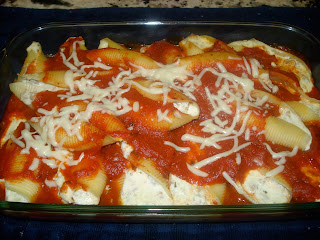 It tasted quite good, but the portions were still larger than one person can handle.  Wish someone could help me out.
Hungry yet?
Posted by Lady T at 1:13 PM