While I was really looking forward to my trip to Chicago, I was not excited about the weather.  Chicago’s weather is rarely kind to me.  However, this time around we must have had an understanding.  It was 87 degrees this weekend! Luckily Mr. M recently moved to Chicago and had some time to hang out with me.  After dealing with the super hectic traffic situation, I finally made it.  Mr. M took me on an architectural tour of The Loop.  We walked from Madison and Peoria to our final destination 633 North Wells Street. 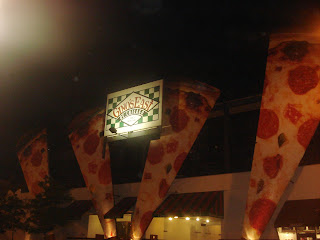 I was a little discouraged to see so many people standing in line and thought for sure we would be out there forever.  However, within 5 minutes we were inside – it pays to roll in pairs. J We entered and immediately I noticed the writing on the wall – literally.  Gino’s encourages its customers to write on the walls and seats.  It’s kinda hard to read – if you plan to go there and write on the wall bring white out or some color other than black or blue.
Anyway, when we sat down, we perused the menu and immediately agreed that calamari would be the best way to start.  We also ordered our deep dish and it wasn’t until then that I realized just how much longer I would have to wait.  45 MINUTES!! Apparently that’s how long it takes to make a deep dish pizza.  Luckily the calamari arrived within a few minutes. 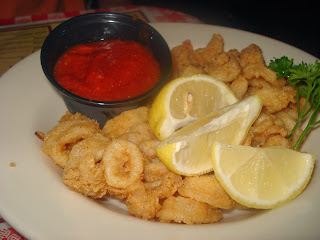 It was standard fare calamari and marinara sauce, but it did the job.  At the time I was hoping we had also ordered a salad, but once our pizza arrived I was glad we didn’t. 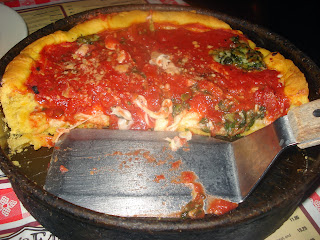 That my friends is a beautiful Cheese & Spinach Chicago Style Deep Dish Pizza.  We only ordered  small, but I must say I was a bit intimidated by the size of the pie.  I initially used a fork and knife to eat it because it really was that serious.  The pizza tasted AMAZING!  The combination of the cheese, spinach and crust was really something special.  However, what really brought this together was the delicious chunky tomato sauce.  After one slice I had enough, but I knew I’d be craving it again later so I took it back to the hotel with me.  The next morning right before I hopped on the party bus, I heated it up and couldn’t have been happier. 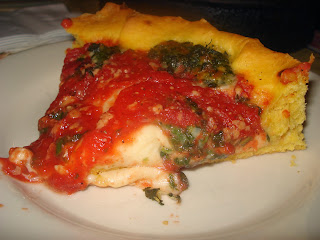 Gino’s East is the truth.  I will definitely be returning to Chicago soon.  Hopefully, Mr. M will take me on another walking tour and we’ll end up at a different pizzeria.  I’m a big fan of comparison tasting J
Hungry yet?