Mr. A and Ms. Y moved to Brooklyn earlier this month. While they lived on the UWS I never visited so I figure one trip out to Brooklyn should make it clear that I care. Not only that MM came with me so they have to know it's special. Their new home in Park Slope is beautiful and most importantly located close to a strip with many restaurants. We decided to go to one of those restaurants.
Al di La does not take reservations so when we showed up at 5:58, two minutes before they opened there was already a line. Luckily we were seated in the first round. The restaurant is cute. It seats about 40 people and has some interesting decorations. The one sheet paper menu appears to be printed daily. It had many options, but they were so similar it appeared as though the menu had no real depth. I eventually found something I'd be willing to eat, as did the others. Ms. Y started off with the Winter White Salad. 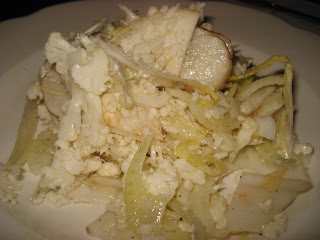 Somehow I managed to capture the color of the shaved cauliflower leeks rutabagas turnips salsify Jerusalem artichokes celeriac champagne vinaigrette and crumbled cheese. Considering the lack of green and the use of so many vegetables it was still a really delicious salad. The combination of the vinaigrette and other ingredients created a slightly creamy dressing. MM ordered the Blood Orange Salad. 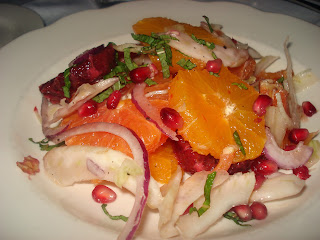 Yea those are really oranges.  Navel, Cara Cara and Blood oranges with fennel, red onions, pomegranate seeds and mint. I actually didn’t taste it but everyone else seems to think it was fine. Mr. A ordered the special seafood appetizer. It was a ceviche combo.  He definitely won (aside from the whole grilled polenta business). 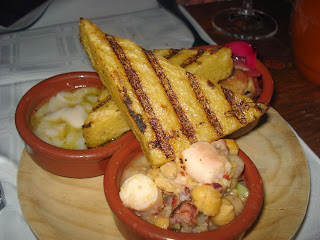 Octopus, mackerel and razor clams. The mackerel was the best because it had a little kick at the end. The octopus was also pretty good thanks to the chickpeas. The clams were boring and didn’t really taste like ceviche. I ordered the Steamed Bouchot Mussels. 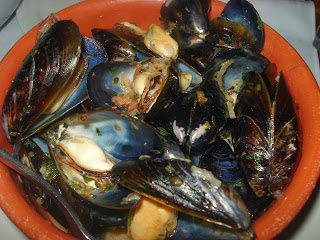 You know how I feel about mussels. Never have they failed to satisfy me. Well I guess there's a first time for everything. Congrats Al Di La your mussels sucked. They were so regular it was underwhelming. The broth which was allegedly seasoned with white wine, tomato, parsley and chili tasted salty, which turned out to be a recurring theme for the dinner. The worst part is rather than serving it with bread for me to dip in the broth, I got a little surprise when I got close to the bottom. 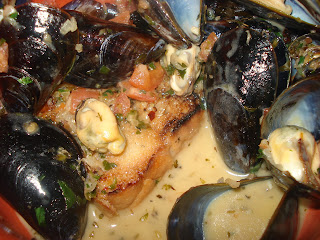 Yup there's my bread just lying there soaking wet. It's no longer considered grilled bread when it's moist and besides no one likes soggy bread.  No one.  I was sour after my appetizer, but still willing to give the place a chance.  Ms. Y ordered Spaghetti Alle Vongole. 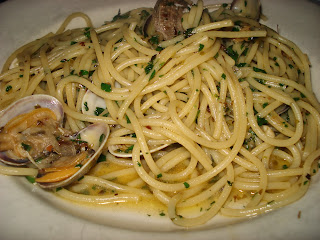 A nice plate of pasta with Manila clams in a white wine garlic sauce.  We all tasted it, and had a similar reaction. Salty.  Womp womp.  Mr. A and MM both ordered the Hanger Steak (shock). 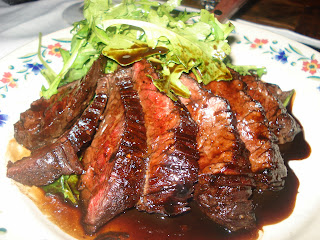 Apparently it was very “I’m eating balsamic vinegar” and not every delicious.  We repeatedly noted how salty the food was, however I think my Galletto Alla Diavola took the cake. 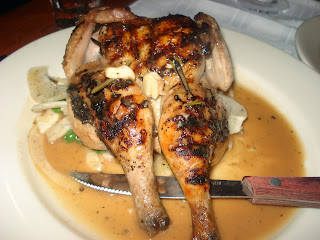 It was obviously a shy little chicken – look at its posture.  When I read diavola, I thought it said diavolo (my favorite spicy sauce!).  Definitely not what was on the plate.  Regardless, I was looking forward to digging into this charcoal-grilled baby chicken. It was served with a fennel salad and mashed potatoes. The fennel salad helped to cut through some of the saltiness from the over reduced sauce.  The potatoes were probably the best thing I ate in the restaurant.   Such a shame. 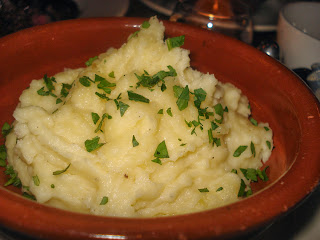 When they brought the dessert menu, I couldn’t help but laugh at the idea that I would order one more thing from this restaurant.  Al di La should be called La Di Da because it's not worth the hype.  I’m so glad we didn’t have to wait on line to eat here because it would have been even that much more disappointing.  At least the company was good – and we had a great dessert elsewhere.
Hungry yet?