My summer has been filled with lots of weekend activities.  Most have been fun, but all have been exhausting.  Good thing that earlier this summer I planned a long weekend in Martha’s Vineyard with Z.  It was such a relaxing weekend and I totally needed it. It was my first time up in MV and I must say in many respects, it gave the Berkshires a run for its money.  (eeep!) Our first breakfast was not one of those occasions.  We went to Among the Flowers.  A cute little restaurant with tons of outdoor seating…you guessed it, among the flowers.
It was a little chilly outside so when they offered us a seat indoors we were happy to take it.  I was definitely looking forward to sampling some of the treats on the menu.  They took a little while to get our orders but once the waitress arrived it was no problem.  Z ordered the Wild Mushroom, Herb & Goat Cheese omelette. 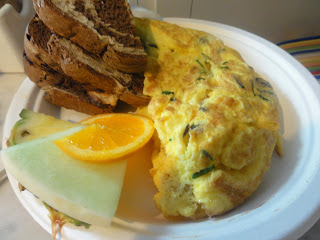 I must say that although the omelette looked good, I was instantly turned off by the fact that it was served on a paper plate. I instantly started to question whether they had running water and if they valued the environment.  They brought the coffee in a mug so I’m not really sure the logic behind their actions.  When my French Toast arrived, I was equally annoyed with the paper plate. 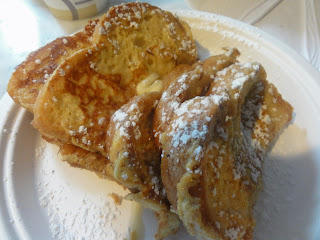 However, the deliciousness of the dish made it easy to forget why I was upset. I scarfed it down and was left staring at the bottom of a paper plate. Hmmph!  The French Toast wasn't enough for me, so I also ordered a side of Home Fries. 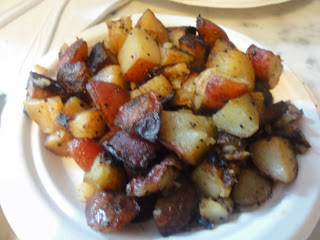 They were well seasoned and the pan fried effect definitely was a good idea.  Overall the food at Among the Flowers was quite good, but the paper plates were a major turn off. I’m sure there were other breakfast spots that we could have tried out but this one was close, the food was good and the price was right. If you’re staying in Edgartown, you should try out Among the Flowers. Just close your eyes to the paper plates.
Hungry yet?