After several rescheduled dates, MM and I were finally able to get together for dinner. I chose Graffit, a restaurant remarkably close to MM's house so it was the perfect location.   The restaurant is a few steps below ground level but they manage to keep it well lit so you don't get the sense you're in a basement. We initially sat in the dining room but were dissatisfied with the menu options. After reviewing the menu, we asked for the tapas menu. That looked a lot more promising but we were told we had to move to the other room. Oddly enough we were allowed to order from the dinner and tapas menu. Keep in mind when I say room, it's not as though there is a door separating the space. Fine the tables are higher in one part but it's still the same restaurant! I still don't understand why they operate in that manner. It's distracting and could cause confusion for guests that don't know they can use different menus in different parts of the restaurant.
After we got past the table swapping and menu-changing ordeal, we were pretty quick to agree on the items that we would order. Gambas al Ajillo was an easy first choice. 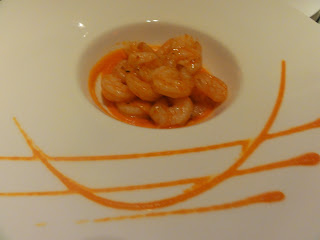 The shrimp in garlic sauce looked very different from what I'm used to. The pinkish color led me to believe there would be a spicy bite, but no such bite existed. Don't get me wrong it tasted good but I think their point was to make sure nothing tasted like it looked. They were successful but I don't know if that was a good thing. The Patatas Braviolis were delicious. 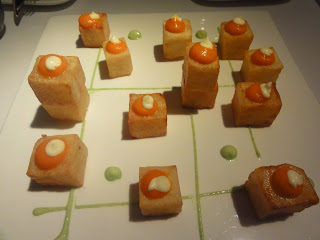 The presentation was great and they tasted incredible. The bravioli sauce was sweet and spicy. This was definitely my favorite dish.  The Empanadillas de Vieras y Mejillones were also pretty good but a little strange. 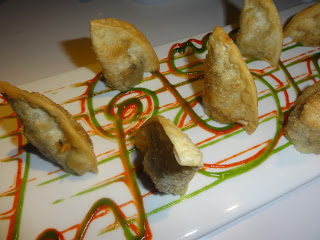 They were filled with scallops, leeks and mussels. They tasted more like egg rolls than empanadas. By far the most disappointing thing we ate was the Bocaditos De Pescado En Adobo. 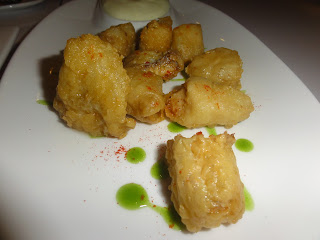 It looked pretty good but in the end I was disappointed. It's already difficult to fry fish whole, it's far worse when you decide to cut it into pieces. The batter was falling off and the pieces were extremely greasy. I think they have since taken this item off the menu.
Overall Graffit was a strange experience. The seating and menu fiasco is jarring and makes for an unappetizing start. The tapas menu is more promising than the dinner menu but that's not to say the items on there are all well executed.  The concept of each dish is great but in the end the execution often falls flat. There are lots of tapas restaurants in NYC that far surpass Graffit. I recommend you try one of those instead.
Hungry yet?