No visit with VBRAT is complete without a group dinner.  I was really excited about the prospect of eating at one of DC’s popular tapas restaurants, but we were told they were booked so I sent a few options to the crew and eventually we settled on Bistro Bistro thanks to their escargot.  Our group of 12 had a staggered arrival but most of us walked in at once.  I certainly did not appreciate the attitude when we first walked in but of course as soon as they saw me photographing dishes there was a quick change in behavior. Too late! I already noticed it.  Luckily, my reviews are largely based on food with a detour to décor and service when it’s notable one way or the other.  We started off sharing a few appetizers while we waited for the rest of our crew.  Of course we ordered escargot. 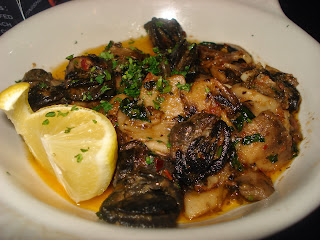 They were delightful little guys sautéed with mushrooms in a garlic butter sauce.  I was a big fan.  I had hoped they would be served in the traditional snail plate but in the end taste is what matters and these snails were excellent.  We also ordered the mussels special, Moules Frère Diable.  I think my love affair with mussels has now become a relationship.  Every time I see them on the menu, I am drawn to them. 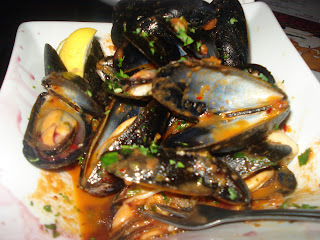 These mussels were sautéed in a spicy tomato broth.  I was definitely a big fan and the broth definitely did not go to waste.  We made sure to soak up the broth with the fresh warm bread they served.  The calamari frites was pretty standard. 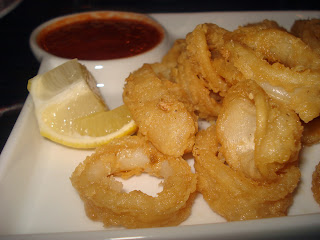 The batter was tasty, but as GK pointed out, the calamari was nay the freshest.  The buffalo mozzarella appetizer was served like Caprese. 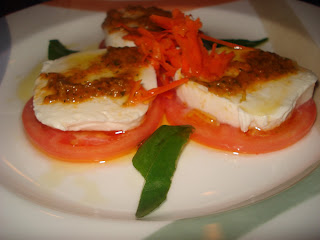 It was surprisingly good considering this is a French restaurant not Italian.  It took us a little while but eventually we ordered our entrees.   GK, Mr. N and I ordered the Paella. 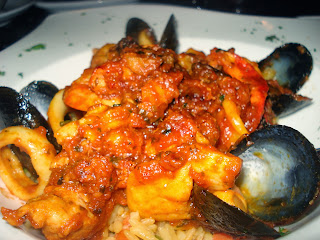 Paella is traditionally a Spanish dish.  This French version was different but also pretty good.  A medley of fresh scallops, mussels, shrimp, lobster meat, and chicken cooked in tomato sauce served atop rice with vegetables.  It was very flavorful and I can see why it’s one of the house specials.  Ms. G ordered the Grilled Chicken Sandwich. 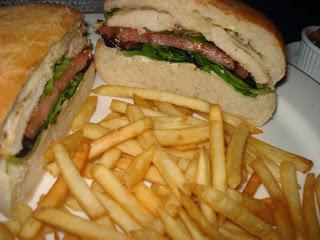 I’m not sure if she wasn’t hungry or if it was really that unimpressive but at the end of the meal, she had only eaten one bite and remarked that it was quite dry.  Mr. S on the other hand emptied his plate.  He ordered the Croque Madame. 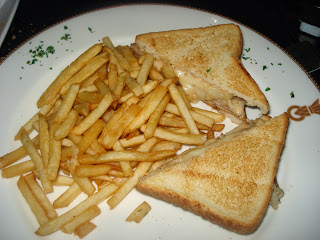 Roasted Turkey Breast and creamy Swiss cheese with a side of French fries.  My guest blogger and her Mr. K shared the French pork chops.  A grilled pork chop with brandy, caramelized apples, served with mashed potatoes and vegetables. 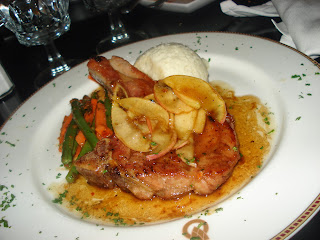 She reports that the caramelized applesauce was delicious and the pork was soft and tender.  She believes the sauce would have tasted delicious with any type of meat.  Mr. S ordered the Spinach Lasagna. 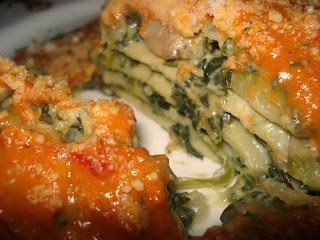 He sat on the other end of the table so I didn’t hear what he thought about his dish.  Hopefully he’ll share his thoughts in the comments.  Mr. W ordered the special Linguine Bistro Seafood Pasta. 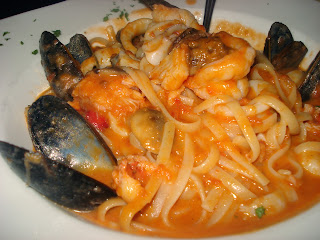 It looked really good and perhaps I would have ordered that had I known it was an option.  He cleaned up his plate – which is no surprise.  Mr. I arrived a little late (shock) but still managed to order the Portobello Pesto Ravioli. 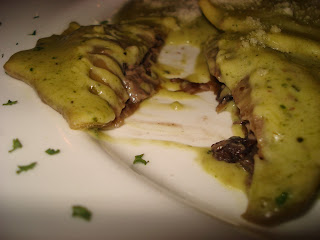 He thought it was alright but it didn’t rock his world.  He gave the restaurant an “alright” for their vegetarian options.  When Ms. O arrived some of us had started ordering dessert but she ordered the Flounder Meuniere. 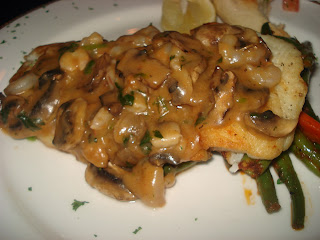 It was savory and well seasoned.  The veggies received an okay rating and a belief that they were probably frozen.  What a shame.  Frozen vegetables are a terrible short cut at restaurants that’s just not worth the wrath of your customers.  Any indiscretions were forgiven when dessert arrived. 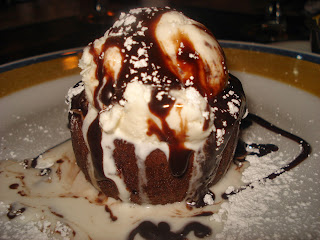 Chocolate Soufflé is the perfect end to almost any meal.  The Tiramisu was also quite lovely. 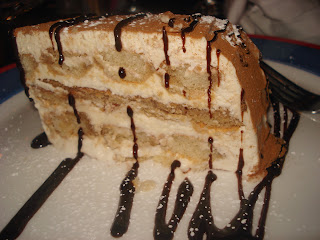 Dining at Bistro Bistro was quite the festive event.  The restaurant is large and great for big groups.  It also can be private and intimate if that’s what you’re looking for; you just have to sit away from the large group of 12 at the front of the restaurant.  The menu has some traditional French favorites but also a good selection of other options.  There really is something for everyone; some things are just better than others.  The servers were generally attentive and accommodating.  Several hundreds of dollars later, we left the restaurant quite happy with our experience and feeling ready to continue the rest of night in DC.
Hungry yet?