Out of fear that I may not see her again before the year ended, I asked Ms. O if she had time to grab dinner last week.  Lucky for me, she said yes.  I suggested Dévi because I have heard great things and it was on Village Vines.  VV offers discounted dining at restaurants without brining in a coupon.  Just make a reservation through their website and you’re good to go.  The restaurant is nicely decorated but the décor could stand for an upgrade.

We sat on the main level and our server was pretty attentive though his tone at times sounded as though we had never eaten Indian food before.  If only he knew….  They started out by bringing out the chef’s amuse. 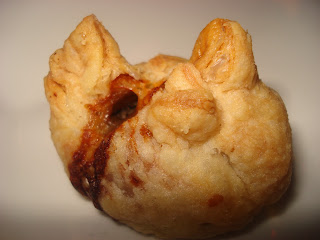 A delicate puff pastry filled with mushrooms and a nice level of spice that was well balanced by the fresh pastry. Ms. O and I started with two appetizers.  Tamarind-Chicken Wings and Shrimp And Calamari Masala Frito Misto. 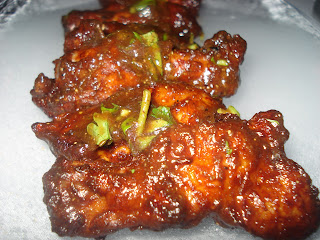 The chicken wings were extremely flavorful and filled with tamarind, red chiles and garam masala.  There were certainly enough wings to go around so this appetizer is made for sharing, but the wings themselves were mostly small – must have used small chickens, maybe even Cornish hens! 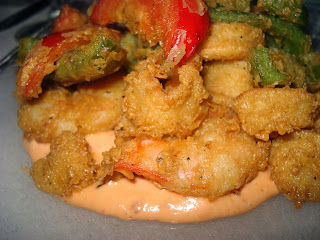 The Masala Frito Misto was a little less impressive.  Not to say it wasn’t good, but I think the description on the menu was different than what turned up.  The plate was filled with as many peppers as pieces of seafood.  The few pieces of seafood were quite delicious. A plate of plump shrimp and delicious well-seasoned pieces of calamari.  The tomato-chutney mayo was also impressive.  As for the entrée, I had a harder time selecting than I thought I would.  I wanted to try something new, but in the end I ordered my tried and true favorite, Chicken Vindaloo. 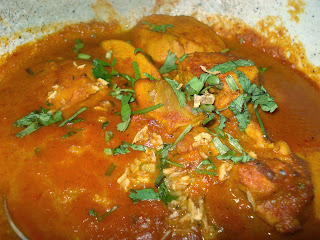 This tangy spicy curry is made even more amazing by the potatoes and incredible amount of spice.  The seasoning was on point at Dévi, except they UNDERSALTED the chicken!!! How could they?!  Ugh.  I was disappointed but in the end it was still quite delicious just missing a little something.  Ms. O’s Abha Aunty's Baingan was perfect. 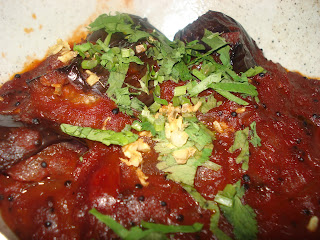 Rich delicious baby eggplant mixed with tomatoes, onions and tamarind.  Wowee!  I’m so glad I added eggplant to my list of things to eat!  One thing I will note is that while their prices are *somewhat* reasonable (small plates more than entrée so average), they don’t serve their entrées with naan or rice!  Absurd.  Of course we ordered naan and it was perfect!  The only real mistake from the night was ordering dessert. 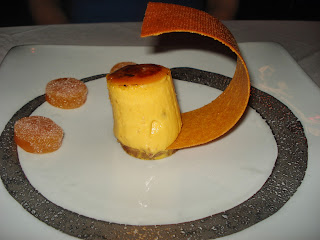 Our Mango Cheesecake was really lacking.  There was no cheesecake to be tasted and the mango flavoring was barely there.  Allegedly there was Mango-passion fruit sauce but again that didn’t really come through.  The pieces of “mango pate de fruit” were really not that great.  It was jellied rather than candied which made it less desirable.  Next time I'll stick to the food and skip the dessert.
Dévi was a great dining adventure and thanks to Village Vines it was a little less pricy than it could have been.  The menu has a lot of great options and is definitely worth exploring so I could see myself going back to try something else.
Hungry yet?