I tend to write in the order I eat, but these days everything is jumbled up. Press dinners have come and gone and there are multiple blog worthy meals that I will write about later. Thankfully, for the first time in a long time, I had a weekend with almost as much play as work.  Two successful brunches and a housewarming of fun along with plans for a celebratory President’s Day weekend.  Eventually I'll update you on all these eats, but for now I'll start with brunch.  After a couple of reschedulings and a missed restaurant week opportunity, Z and I were able to get together for some brunchy goodness.  It was a rainy Saturday and I was still exhausted from my second trip to Memphis in as many weeks, but I hiked down to Nero d'avola on Greenwich and Gansevoort. After spending the previous day studying their menu, I was really looking forward to it. Imagine my surprise when Z and I discovered it was closed!! Not closed like oh it's too early on Sunday come back later, but closed like our sign is still up but we haven't been open for business in weeks.  Absolutely ridiculous. I was livid. Hungry, tired and getting drenched by the rain, Z and I explored options on Little West 12th but nothing struck our fancy.  We decided to head a little further north to Il Bastardo.
It's a sprawling restaurant that seats 150 and was packed for brunch. They had several desirable items on the menu.  We were starving so we immediately ordered the roasted potatoes. 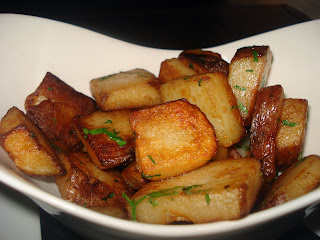 They were piping hot! Well seasoned though and tasty.  They were the perfect appetizer.  Z ordered the Eggs Benedict with Prosciutto. 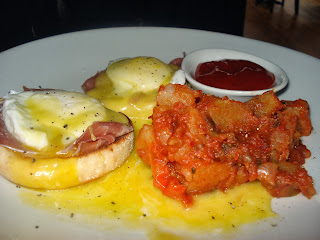 It looked delicious and apparently was cooked to perfection.  The egg dishes are all served with homemade potatoes.  I got a taste of them because I ordered scrambled eggs. 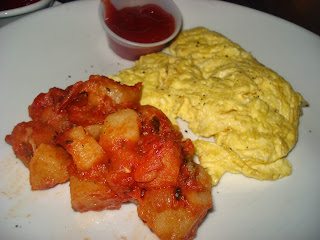 The potatoes are INCREDIBLE.  They taste as though they've been cooked in a delicious tomato stew.  I would go back just for the potatoes. Of course with my monstrous appetite, the eggs were not enough for me. After perusing the menu for a bit, I decided to order the French Toast with mixed berries. 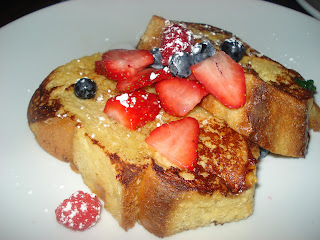 It was mouthwateringly good.  Thick and fluffy loaves of sweetened bread, what's not to love?! My goodness it was like dessert! In fact, Z had a couple of bites as dessert.
We were so stuffed after this fantastic brunch that our plans to go shopping were abandoned.  I heart il Bastardo and in fact plans are already in the works for a return trip verrrry soon.  I recommend the potatoes and taking advantage of other brunch specials.
Hungry yet?