Brunch fest continued last weekend.  I met up with the 7 lovely ladies who brunch and was really looking forward to dining at Good.  Alas, the 8 of us were too much to handle so I recommended walking over to Little West 12th and seeing if there was a place to seat such a large party.  We ended up at Revel.  It was an up and down experience that leaves me writing this lukewarm review.
Revel does have a beautiful space with an enclosed garden, high ceilings, exposed brick walls and LOTS of sunlight that's to the retractable roof.  However, the okay food and subpar service left much to be desired. Luckily, the conversation was lively and the sun shined brightly upon our table.  We were seated almost immediately which was great considering our large group.  As soon as the menus were distributed, I knew I would have a hard time deciding.  There were several options and considering how hungry I was everything looked great!  Since I had fantastic french toast the day before, I decided to go with the eggs. 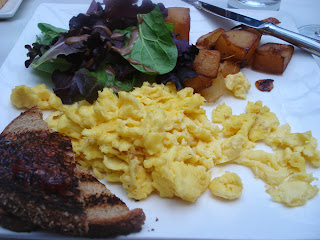 Three eggs scrambled well were served with toast, potatoes and a small bed of mesclun greens.  Not bad.  I mean it wasn't great but I sure did eat every bite.  The greens were a welcomed addition on the plate.  The toast was also pretty good, especially because it was served with an assortment of spreads.  The eggs appeared as though they were cooked on the same pan as something else and in fact Ms. R found a piece of spinach in her eggs. Ugh I hope they don't just have one big griddle that cooks everything. yuck.  The potatoes were tasty but could have used a little more umph.  Ms. R ordered pancakes with mixed berries. 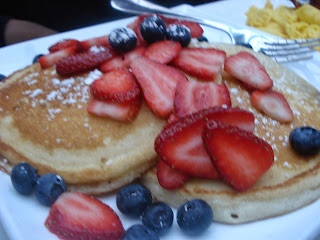 There was nothing spectacular about the way the pancakes looked. They definitely had the extra ring which appears when more batter is added after the pancakes have already started cooking. tsk tsk. Apparently the fruit made all the difference and the strawberries were spectacular.  After finishing my eggs, I assisted Ms. R with the rest of her pancakes.  They definitely didn't taste as good as my chocolate chip or pumpkin.  Even my buttermilk taste better. Ms. G ordered the Scotch Eggs 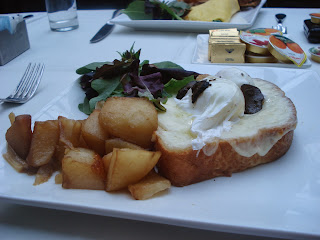 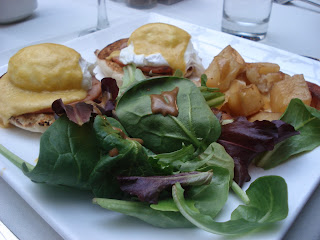 I gotta tell you all this brunching really has me thinking I may try the whole runny egg thing again. Not too soon though, I still love well-cooked eggs.  Ms. D and AA ordered the Garden Omelette. 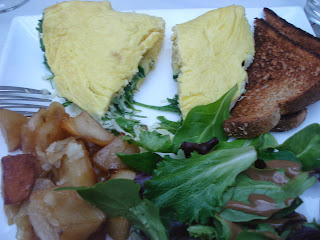 It was "surprisingly good."  Ms. S also thought her French Toast was good. 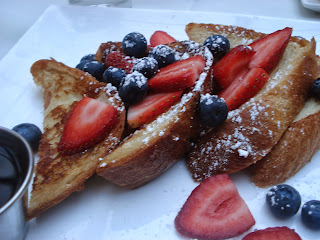 But she did remark that it was warm rather than hot.  Which leads me to why this review is lukewarm.  I’ve said many times that my main objective on this blog is to focus on the food, but on occasion if the décor or service is notable, I will provide my comments. I was hopeful when we walked in because Revel was bright and sunny. However, the service almost ruined the experience.  There were multiple issues regarding the water. Dirty glasses, objects floating in water - things that you should not have to be bothered with while at a restaurant.  Ms. A ordered coffee and imagine her surprise when she started stirring and felt the grit at the bottom of her cup. Coffee grains? Seriously? It's unclear whether this was instant coffee or they had reached the bottom of the batch.  Either way, it’s unacceptable. As though the coffee incident wasn't bad enough, the orange juice and grapefruit juice were both served with ice.  I mean really Revel, are you trying to cut costs or does your staff not know any better? Shameful.
Last and definitely least was our waitress' inability to get it together.  She was super slow to come take our order which I can sometimes understand. When there's a big group you want them to have time to think about what they want, but in this instance, I saw her socializing with another table.  That's right not servicing, but socializing. Hugging and conversing while another table waits unattended is not okay. When she finally did take our order, she forgot to enter some items and brought some items for the wrong people.  When our check came, that was the final straw.
There were two additional items on our bill that didn't amount to much, but was just enough to make our math a little more difficult. So we worked it out so each person would pay an even amount and once the extra items were removed, the waitress would actually end up with a little bit extra. Nice right? Wrong.  She came back and informed me that we had miscalculated, her manager had redone the calculations and the three credit cards were charged a little bit more.  Ordinarily I would take issue with this anyway because I don't think anyone should swipe my card if they are going to charge me more than I’ve instructed them to charge, but in this instance I was even more irritated because she had failed to remove the additional items from our bill.
Everything was eventually resolved and she came back to our table sheepishly and stated that we would all laugh about this some day.  Not funny. Brunch at Revel was nevertheless a success because it was the first time we all got together in far longer than I care to remember. It was a bright sunny day, which was a great contrast to the weather the day before.  The food was fine. Nothing spectacular, but certainly not bad. I'd reluctantly eat there again but only if there were no other options in the neighborhood and we could somehow arrange for better service.
Hungry yet?