I have been out of town a lot these days so it has been a while since I attended a press dinner. I was fortunate enough to be invited to a delicious press dinner at Blue Caravan, a new UWS modern tapas and global cuisine restaurant. I was immediately impressed when I walked in the restaurant because I entered through the windows! It was a warm day so the full length glass windows were wide open and doubled as a door. The exposed brick in the front area of the restaurant is reminiscent of a lounge. Since I was there on a Monday night, it was a lounge because there was a live band playing enjoyable music at a volume that was not offensive. The calming blue tones through the rest of the restaurant also add a very positive vibe to the restaurant.  When we sat down and I saw the tasting menu, I could hardly contain myself! 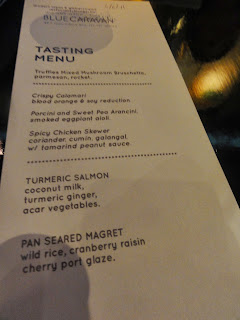 The first course of Truffled Mixed Mushroom Bruschetta was out of this world. 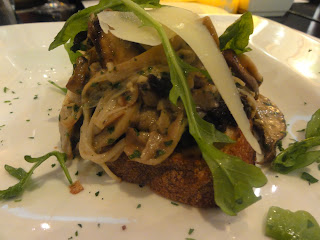 This is obviously a treat for mushroom likers or lovers. Yet, even I, a mere accepter of the mushroom, was in love with this dish! I've definitely avoided mushrooms in the past but this bruschetta has me thinking of revisiting my mushroom policy. The bread was toasted but not hard enough to hurt the roof of my mouth. The crunch was perfect with the mushrooms and parmesan.  Our trio of appetizers soon arrived. 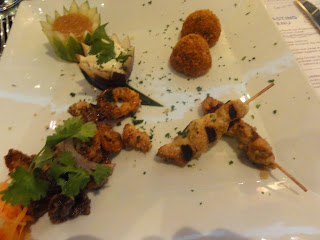 Apparently, they're not offered as a trio but I think it was a great combination.  The Crispy Calamari was definitely the favorite. 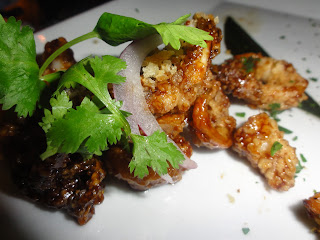 It was simply divine! The blood orange & soy reduction that was drizzled over the tender calamari left me yearning for more.  YUM! The Porcini and Sweet Pea Arancini was also delicious. 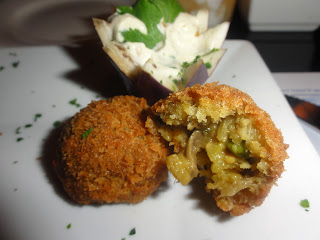 The smoked eggplant aioli is actually what made it really good. You could really taste the smokiness. I was pleasantly surprised by the Spicy Chicken Skewer. 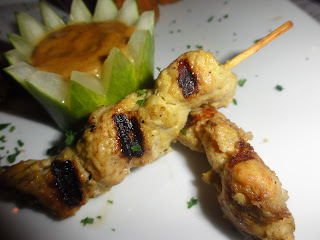 I NEVER order chicken skewers. I just find them to be so boring and flavorless.  This was anything but boring! Well seasoned with coriander, cumin and galangal the chicken was spectacular on its own. When I dipped it in the tamarind peanut sauce, it was like heaven on earth! After a long break to let all the appetizers settle, our entrees arrived.  We agreed sampling the two options would be the best way to handle the task of continuing to eat.  The Turmeric Salmon arrived first and parked itself right in front of me. 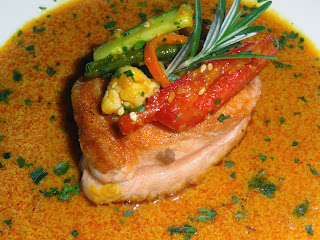 It was placed in coconut milk, turmeric ginger and vegetables.  The first thing I did was use a spoon to scoop up some of the sauce and wowee was it good! It had a sweet and spicy taste which only left me wanting more. The salmon was cooked to perfection. It had a crispy top but was medium in the middle. I thought for sure the salmon was as good as it gets, and then the Pan Seared Magret arrived. 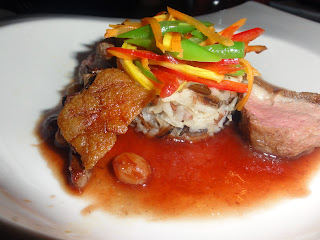 It was served on a bed of wild rice, cranberry raisin and finished with a cherry port glaze.  The duck was out of this world. Duck usually overwhelms me and this was no exception. But I couldn't help it, I just kept going back! There were definitely a few moments I let out light moans of enjoyment because yes, it was just. that. good.  Thinking that I had done all that I could, I started debating whether to walk home or take the subway. That's when I realized dessert was on its way.  As soon as it arrived, there was a hush over our entire table. 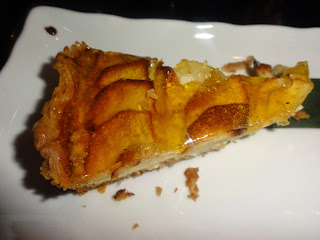 The Apple Tart was crispy, warm and sweet. I ate every bite. The Profiterole was also very delicious and it was just enough chocolate to satisfy my craving. 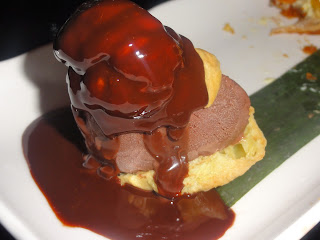 What a fantastic meal! Blue Caravan is amazing. The restaurant is beautiful, the owner is friendly and the food is magnificent. The blend of small plates and large as well as the global reach of the menu is truly a delight. I recommend heading over there on a warm evening so you can enjoy the open window/door and an added bonus of live music if you go on a Monday.  Apparently they'll also be adding a sidewalk cafe soon so you can enjoy one of the best aspects of summer dining in NYC.