It's been a while since Z and I have gotten together. We were desperately trying to get a reservation at one of the restaurants we've been lusting after but unfortunately were not so lucky. We did end up at another Italian restaurant that was quite remarkable. We didn't make reservations but when we showed up at Po, they were happy to accommodate us at the bar. The bar only seats 4 and the restaurant is not that much larger so it was no surprise that it was packed. The menu offered many delicious treats and I was hoping we could order two pastas and the fish special. However, Z wasn't up for it and our server advised against it. So I figured an appetizer and two pastas would do. They started us with a White Bean Bruschetta. 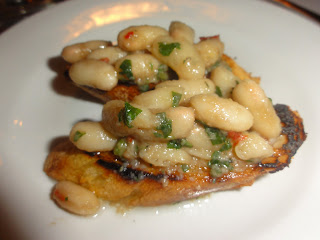 It was delicious! The beans were well flavored and quite wonderful with the toasted bread. The appetizer did not disappoint. Po Cured Tuna. 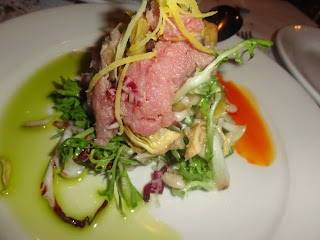 The presentation was lovely but of course taste always wins and in this case the taste was remarkable. The white beans made a reappearance and the chili mint vinaigrette was incredible. I couldn't have been happier! Z liked the two sauces but they didn't really do much for me. That didn't stop me from finishing every morsel of food in the plate. Fantastic! Our pastas arrived shortly after. 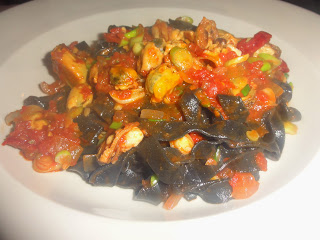 The Black Fettucini was served with mussels out of their shell which was a little alarming at first but made for easy consumption. The pasta was incredibly fresh with just the right texture and a perfect balance of sauce. The sauce had a spicy kick which was unexpected but much appreciated! It definitely left a mile on my face and made quite the impression. The Gnocchi alla telefono was equally impressive. 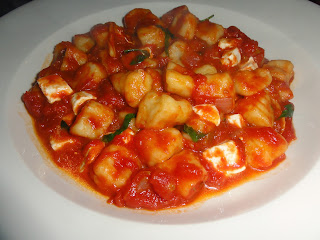 Considering I just made Gnocchi a few weeks ago, I was super excited to see how mine compared to the master. The Gnocchi at Po was heavier than what I've had at other restaurants but incredibly delicious. The heaviness was actually a plus because I ended up feeling full. The fresh mozzarella referred to as telefono was just as described, stringy like a telephone! I was definitely happy with our entree and appetizer choices. I should have quit while we were ahead. Instead I decided that dessert was a good idea. 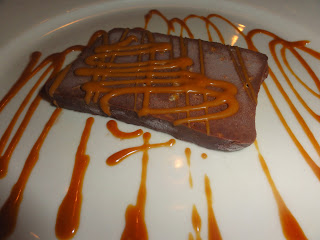 The Dark Chocolate Terrine was just as simple as it looked. It was definitely prepared in advance and mint have even been frozen! Ugh. As if! I barely had two bites and I was way over it. 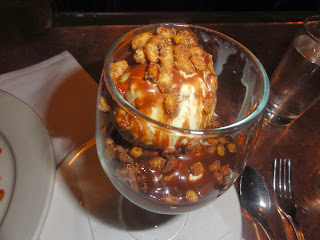 Z ordered the Po Sundae. She liked it, especially the ice cream. I was too disappointed in my Terrine to try anything else. I would have definitely preferred stuffing myself with the fish special over trying the dessert.

Despite the dessert, Po was an excellent experience. the pastas were fresh and even reheated well a day or two later. The past portions are huge and you can push to finish them but then you'll have to roll yourself out of there. The dessert was less than, but with all the cute little restaurants around there, you could easily find somewhere else to end your night.