Ms. O, Mrs. A and I set out to do some good a few weeks ago by participating in the American Heart Association Wall street walk. We gathered at Ms. O's home ready to join the walk but due to the weather we didn't quite make it. Even though we didn't walk we did work up an appetite so we decided to dine at Open Door.

It's a pub like restaurant with dim lighting and ample seating. We sat in a booth and considering we had spent some time reviewing the menu we were ready to order. Unfortunately, they had changed their menu and some of those dishes were unavailable. Instead we decided on several appetizers and figured we'd have a good time. The Wasabi Buffalo Calamari was pretty good. 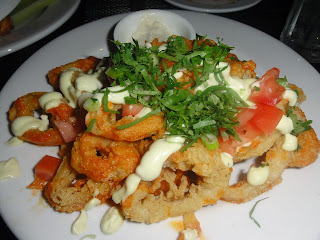 I was a little suspicious of the buffalo drizzle on top, but it wasn't offensive. Unfortunately, it also didn't add much. The batter was falling off which made the calamari a little less desirable. It also didn't help that these were the biggest pieces of calamari I had ever seen. The Buffalo Wings were spectacular. 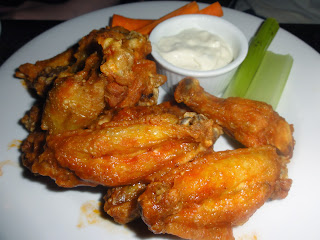 Crispy and well sauced, but not over sauced - exactly what I look for in wings. My favorite item was definitely the Crab Cake Slider. 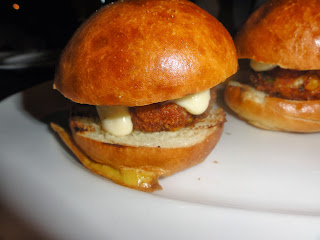 Yummers! We should have ordered a table full of this! They were chock full 'o crab and corn and the dijon sauce was sensational. The Mozzarella Triangles were also pretty good. 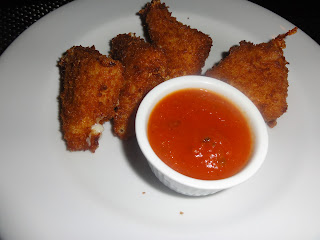 By the time I made my way over to them they were room temperature so the cheese wasn't as stringy as I like it.  The french fries were regular, but at least they were served in a cute little basket. 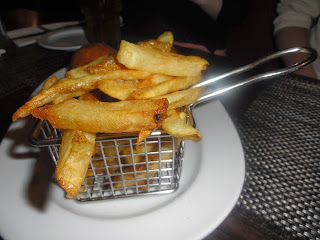 By far the worst dish we ordered were the Tuna Tacos. 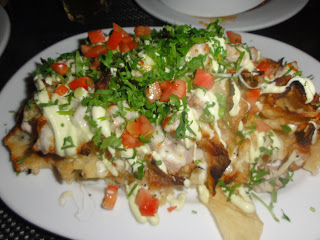 A big mess of Wonton Chips, Melted Cheeses, Fresh Tuna, Tomato, Green Onion & Cilantro, Wasabi-ginger Aioli. Gross, yea? The tuna was hard to find, the chips were flimsy and tasteless. It was just all wrong.  Thankfully our server was kind enough to take it off our bill when she noticed that we barely touched it.

Perhaps we were too ambitious because we still had a lot of food on our table when we decided it was time to go, but I think it's because we had certain items we wanted to eat and the disappearance of the Tapas menu was quite disappointing. Overall, Open Door was fine. Nothing spectacular but good enough to eat. Just stay away from the Tuna Tacos!