I was super excited to attend the Malaysian Night Market last night especially because Ms. R agreed to go with me.  When I arrived around 7:45, it was incredibly crowded.  I couldn't believe they would put such a fabulous event at such a terrible location.  There was barely enough space to see the names of the restaurants, let alone decide which stand you would get your food from.  I tried to take a few pictures of the crowd so you could see what was going on. 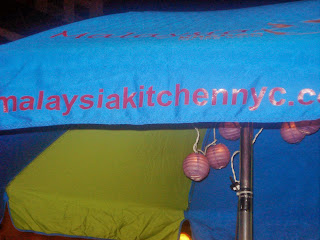 When Ms. R arrived a few minutes later, we decided that while this would be a wonderful dining experience, it would make much more sense to go to a restaurant, sit and enjoy our meal.  I guess we still had Asian cuisine in mind because we decided to go to Pad Thai.
We picked Pad Thai because of its lively atmosphere, cool decor and extensive menu.  With so many options on the menu it was hard to make a decision.  But as soon as I saw the dinner box, I knew what I would order.  The dinner box is only $13 and is served with the appetizer of the day, steamed rice, soup or salad and a choice of 2 entrées.  Perfect! 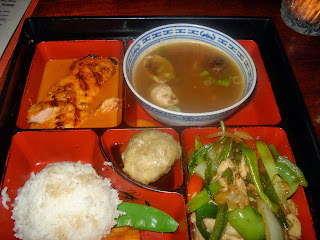 The appetizer of the day was a Thai dumpling stuffed with chicken and shrimp.  Crispy on the outside, moist and filled with deliciousness on the inside. 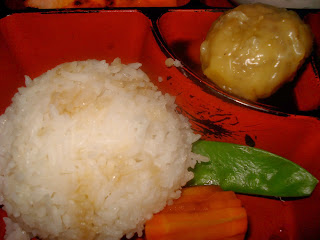 The tom yum soup was just right, tangy and spicy. 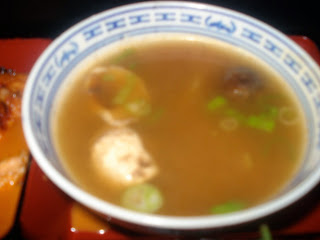 My chili salmon filet was cooked to perfection.  I was a little shocked to find it in a semi creamy curry sauce but the sauce tasted great and so did the salmon. 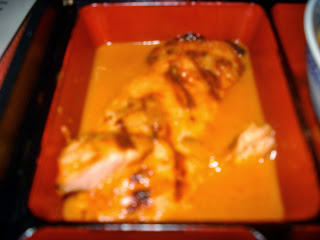 The basil chicken was good but not great.  It was a little bit salty and not as spicy as I would have liked. 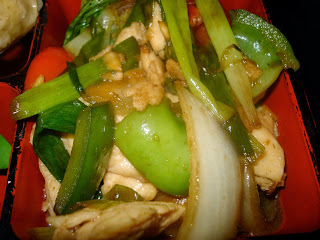 The servers were incredibly nice and very conversational.  We lounged at Pad Thai for quite some time after we finished our meal and no one tried to rush us out.  If I’m in the neighborhood again, I would definitely go back to Pad Thai though I’ll ask for a bit more spice in my chicken and a little less salt.
Hungry yet?