On the drive back from Isabela, Bestie and I stopped at El Buen Café.  This is apparently a popular rest stop for those travelling from San Juan to Mayagüez.  When we pulled into the parking lot, I heard a phone ringing and turns out someone had dropped their phone in the parking lot and thought it was lost.  Considering I found the phone, I figured my luck was set for the week – I mean one good deed, right?
We entered El Buen Café and I was excited to see all the delicious treats in the display case, although I do wish we arrived in the morning when they were first put in there.  Nonetheless I knew I had to be an adult and order real food not just sweets.  I settled on the traditional Puerto Rican dish Mofongo. 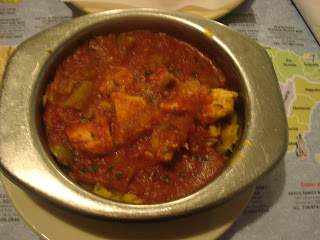 Mashed green plantains. Mine was topped with a chicken stew that was very meaty, extremely flavorful and quite delicious.  Score. I felt like a winner already.  Bestie ordered soup, cuz that’s how she rolls. 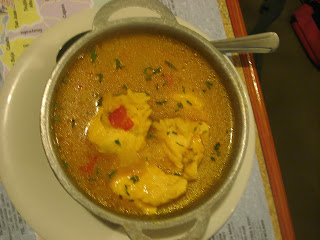 Sopa de pollo.  Hers was also filled with chicken.  A little too much chicken if you ask me, but hey better more than less, I guess.  They also brought us some bread which was spectacularly awesome.  Something about flat bread really puts me in another place. 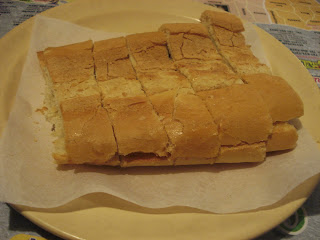 One of my favorite parts of eating in PR is that everywhere you turn someone is saying buen provecho.  Which roughly translates to bon appétit.  How awesome is that?!  Very considerate and polite.  At least 3 passersby said that to us while we were eating.  Apparently Bestie hears that even while having a snack at the bus stop – yup Puerto Ricans def respect the importance of enjoying EVERY dining experience.  Weird that there’s no English equivalent, huh? Tsk tsk
Hungry yet?
Posted by Lady T at 2:47 PM