In light of recent events, I've been spending a lot of time with my Borella.  Understandably, we've mostly had take out from the restaurants in his neck of the woods.  Oddly enough, some of them are kind of good. While not all of them are blog worthy, I will give a quick mention to my favorite one so far and perhaps name some others in subsequent posts this week.

I desperately wanted Thai food (shock) so I started perusing urbanspoon, seamless web and menupages.  Eventually I ended up selecting Little Thai Kitchen.  I remember walking by it one day and being intrigued.  The lunch specials arrived about 40 minutes after we placed the order.  I wasn't thrilled about the wait but figured it must be a sign that they're busy or something. 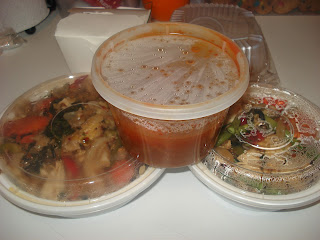 The lunch special is $11, a little more than I'm used to at other Thai places, but I thought maybe they were serving something special.  The Tom Yum Soup was certainly special. 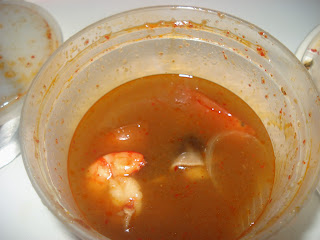 A spicy tangy soup with lemongrass, tomatoes, mushroom and shrimp.  I was really impressed with this soup. I've had quite a few bowls of tom yum and this one certainly ranks among the top 3.  For my entree, I ordered chicken basil medium spicy. 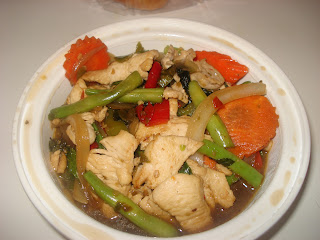 I was pleased with the spiciness and various vegetables.  The carrots were a nice touch.  The rice was less than impressive. Inedible even.  Demerits for poorly cooked rice.  My Borella ordered curry puffs for his entree. 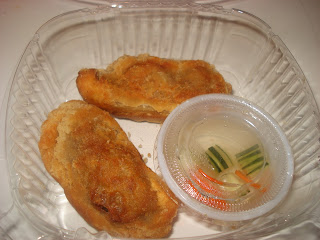 They were definitely not up to par.  As a frequent consumer of curry puffs, I was quite disappointed.  This one was greasy, too much dough and not enough filling.  The drunken noodle was better, but still not great. 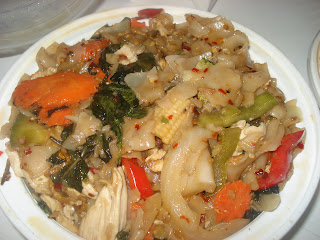 A little greasy but ample portion and different vegetables than the usual.  Love me some baby corn!  The best part of drunken noodle is that it is a simple dish.  This one is not simple so if you're into traditional drunken noodle, beware.

It's hard to rate take out because part of reviewing restaurants is getting a feel fore the service and also the presentation of the dishes. But alas, sometimes that's what you're left with.  As the winter months come closer, I anticipate many more nights of cooking and perhaps a few involving take out.  Little Thai Kitchen was okay.  With all the Thai restaurants in the city, I wouldn't rush to this one.  It's more expensive than the ones I've been to and doesn't offer the same quality of food.  Perhaps it's an east side thing, I've never really been a fan though.