While I was contemplating what I would eat for dinner, Y-squared sent me this image. 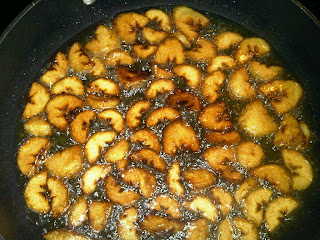 Ahhhh few things put a smile on my face the way plantain sizzling and turning a nice golden brown does.  Y-squared wanted to make sure all was well and let me know that he had "a headache from eating."  Yea, I know.  Not cool.  I quickly made my way to the grocery store and decided on a very simple Rice & Chicken with a side of plantains.  I spent $6.51 which is less than I usually spend on lunch at work, on those rare occasions when I end up buying my lunch.

I got home with my 5 pack of chicken drumsticks and thighs, 3 plantains and 1 box of Goya yellow rice.  I brought out  a large pot added a couple of tablespoons of olive oil and tossed in the chicken. 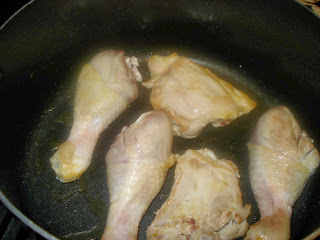 I must have been really hungry because I forgot to add salt and pepper.  Sadly I didn't realize until after the food was done.  After letting the chicken cook for 5 - 7 minutes and turning it when necessary, I added 1 1/2 cups of water and brought it to a boil.  Next I added the packet of rice and after it boiled I lowered the heat and covered the pot so it could simmer. 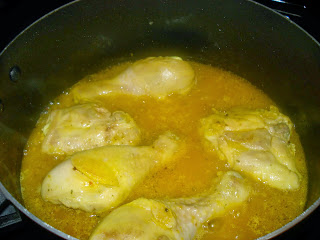 After 15 minutes, I added fresh chopped broccoli and peas & carrots. 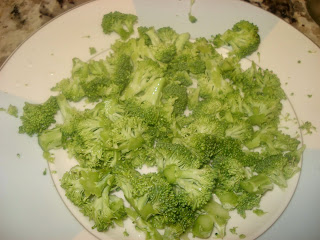 I love colorful dishes.  Meanwhile, I fried one of the 3 plantains.  After letting the rice simmer until the water evaporated, it was time to eat. 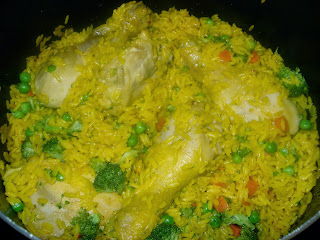 Yup that's right $6.51 gets you all of that :-) Actually, it's more because there are still two plantains waiting for me. I don't know if I'll have time to cook again this week, but at least I have enough to eat at home a few more times.