Mr. G and I went to Brass Monkey’s makeshift Beergarden to watch the World Cup Final.  I was super excited to watch David Villa and La Furia Roja win what turned out to be a thrilling game definitely fit for the final.
To celebrate Spain’s victory, Mr. G and I went to Spice.  We stuck to the one between 19th and 20th.  This was the first time I had a real camera there so while some of the dishes are the same, I couldn’t pass up the opportunity to show you how great the food looks.
We started off with the special appetizer.  Shrimp cakes. 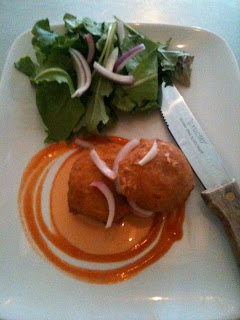 They were hard on the outside but soft and actually had the consistency of moi moi on the inside.  It tasted like shrimp but in a baked form.  Pretty good and would definitely order it again.
We ordered two entrees to share. Drunk Man Noodle with shrimp and chicken which we had just a few weeks ago and the special Grilled tilapia and jumbo shrimp with Siamese fried rice and asparagus with teriyaki sauce. 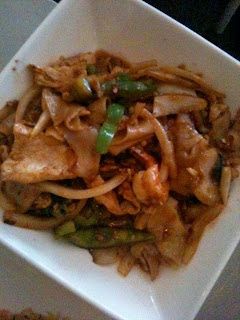 The tilapia tasted pretty good as did the shrimp.  However the teriyaki sauce was not very impressive.  The Siamese fried rice was flavorful but a little dry. 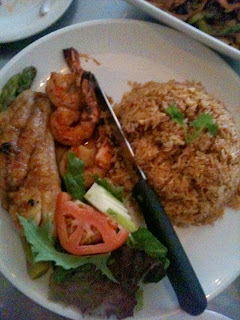 While I wasn’t dissatisfied with the tilapia dish, it was the first time I had been less than enthusiastic with an entrée that I ordered at Spice.  Good thing we had the Drunk Man Noodle to go with it.
We also ordered the Chocolate Molten Cake with Green tea ice cream. 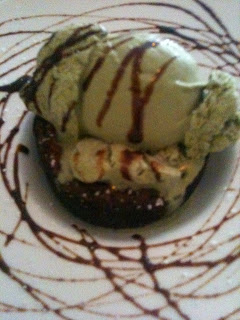 Amaaazing.  Truly one of the better desserts I’ve had.  Simple but satisfying!
Hungry yet?
Posted by Lady T at 9:10 PM