An Afternoon in Broome County

I made a quick trip up to see Y-squared today.  There wasn't a lot of planning to it, but sometimes a sister's gotta do what a sister's gotta do...and I mean that in the literal sense.  Anyway, one of the reasons I love dining with Y-squared is that he shares my passion for food, but he is far more adventurous than I am.  We drove around for about 20 minutes looking for something palatable, after all it's Broome County not Manhattan.  Finally, he pointed out a Thai restaurant Lemongrass Kitchen.  In case I didn't make it clear earlier I LOVE Thai food so I walked into the restaurant with high expectations.

For a Broome County restaurant, I was very impressed with the decor.  I later found out that the owner used to own a restaurant in NYC.  I'm happy to share that he brought some NYC swag up there.  The tables had real tablecloths, wine glasses and candles.  Perhaps what most would consider standard for any restaurant, but it was still lunch time so I think they get an extra point for that.

Onto the food...I ordered Tom Yum Soup to start and Y-squared ordered Thai Crab and Lemongrass sticks.  I'm sad to report that the Tom Yum Soup was neh the best.  What was wrong with it you ask?  The problem my friends was two fold.  First, NO SHRIMP! I don't know about you, but every time I've ordered Tom Yum Soup, there is always at least one shrimp floating around in there.  Second, it had the most bitter aftertaste I've ever had the displeasure of experiencing.  Imagine going into the woods and finding the most disgusting leave you can then putting that in your mouth.  That's what it tasted like.  YUCK! 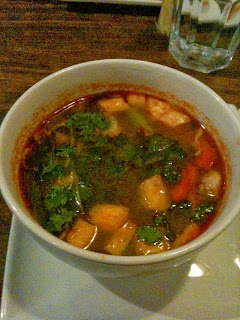 The Thai Crab and Lemongrass sticks won points for presentation and the crab was not overwhelmed by the lemongrass even though the inside was green! 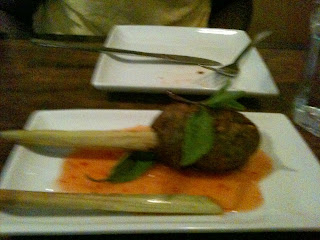 Main course, I ordered Thai Ginger and Basil Shrimp with white rice and Y-squared had the Malaysian Curry and Naan.  I was quite pleased with my dish, especially after the Tom Yum.  However, I could have used a little more spice, but that's just personal preference.  Y-squared adored his Curry and savored every last piece of Naan that he dipped in there. 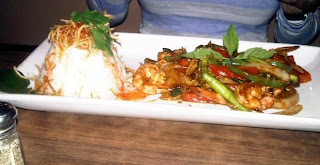 We were the only patrons in the restaurant so we got extra attention from the owner and the waitress.  He told us about his previous business and where he lived in NYC.  He was very endearing and his conversation didn't bother me much because it was usually between dishes.  However, during our main course, he strutted over with one plate of chocolate cake and another of tofu cheesecake with blackberry sauce.  I was so excited and thought, "Wow he's giving us free desserts!" WRONG! He came over to "give us something to think about" during our meal.  Interesting tactic, but it didn't work on us, especially since I brought Y-squared the cookies from last night!

Overall, a decent dining experience.  I would go back to try the pad thai and several other dishes.  If you peruse the menu, you'll note that this is not your typical Thai restaurant.  It also features dishes from Japan, Vietnam, Malaysia and other Asian countries.  If you're strictly Thai, you probably won't enjoy it much, but if you like the possibility of dabbling in different cuisines in the same meal then next time you're in Broome County, go to the Lemongrass Kitchen!
Posted by Lady T at 8:39 PM