No, not my birthday - you'll have to wait til February for that!  Today I had the pleasure of taking Ms. J out to lunch for her birthday.  While this was a spur of the moment event, it worked out wonderfully since we both had light workloads and were able to spend summer associate time on lunch.
Location: Vice Versa
Time: 1pm - 2:50pm shhhh don't tell our employers ;-)
We arrived at this garden level restaurant on 51st street on a beautiful day.  There were two patrons dining outside, but we decided to sit indoors.  They were eating in the front, but ViceVersa does have outdoor seating in the garden area in the back.  I highly recommend it on a sunny but not too warm day.


Anyway, I went with the prix fixe menu.  Salad, Fish and Chocolate Mousse. The Mousse is not a prix-fixe dessert, but I was in a chocolatey mood.  I felt the Apple Cake would have been a good choice picture wise, but I think the chocolate mousse also photographed well.


First: Bread - meh.  I didn't even bother to try it.  It looked as though someone planned to make croutons but decided not to cut the break small enough.  It also had an overwhelming onion smell.
Second: Salad Insalata Mista Con Scaglie Di Parmigiano 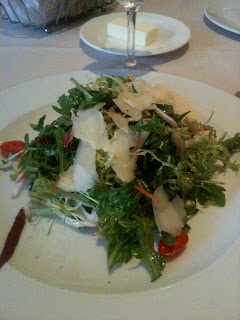 Mixed green salads can be tough because the greens make all the difference.  There was a lot of texture in these greens including some cabbage so I was NOT lovin' it.  The parmesan would have probably helped with that but it was so hard to break and I decided against even trying. NEXT. 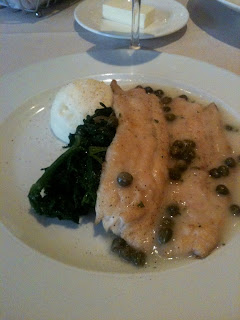 Trout with mashed potatoes and spinach. The trout was a filet and covered in a white wine sauce, which I usually don't fancy but this was quite good.  I stayed away from the capers although I'm sure they're part of why the sauce tasted so good, a little tangy but still really good.  The spinach was steamed and tasted pretty standard not bland, but not too much flair either.  The mashed potatoes could have been flakes for all I know.  Considering they looked like they were served with an ice cream scoop, I wasn't that impressed with the presentation.  However, what really matters is how it all tasted and it was magnificent!
Fourth: The mousse was delightful but nothing too extravagant.  The strawberry on top complemented the chocolate quite nicely.  Ms. J ordered the panna cotta with sour cherry sauce.  Our waiter was kind enough to light a candle in honor of her birthday. 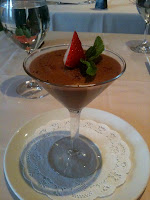 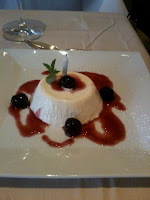