Yup you guessed it.  Mr. G and I went to Amy Ruth's for breakfast.  We arrived at 11:45 so we missed the breakfast, which ends at 11:30.  While we perused the menu, the waitress brought out a basket with cornbread. 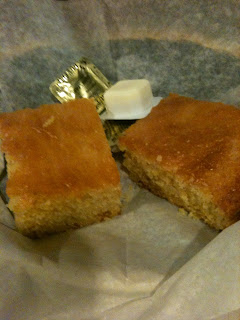 It was piping hot and melt in your mouth good.  We didn't even need to use the butter that they included in the basket.  Then it came time to order.  Mr. G went with The Al Sharpton (Chicken and Waffles).  I couldn't bring myself to order it because I felt the moment had passed for breakfast, so instead I had President Barack Obama (Fried Chicken) with collard greens and candied yams.

The food came out within 15 minutes.  Right before it arrived, the waitress asked us if we saw the sign outside that said they didn't accept credit cards because their machine was broken.  HA! that sign has been there for SEVERAL MONTHS (at least 6!).  I've decided the machine is not broken, they're just trying to avoid paying credit card fees.  Can't knock the hustle, but not loving the dishonesty.

We didn't exchange many words during the meal, because it was just that good.  The chicken was well seasoned and even though it was white meat it was very juicy.  The candied yams had a moderate sweetness which is much better than the diabetes inducing version they usually serve.  Collard greens were pretty standard. 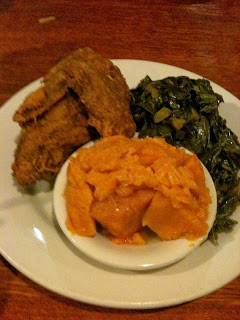 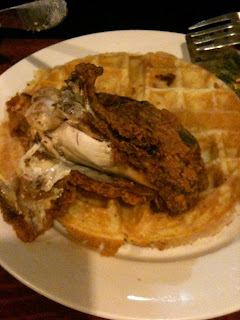 The Al Sharpton was intact when it arrived, but Mr. G started eating before I remembered to snap a picture.  I didn't finish my meal, but they provide take out trays with separate compartments so I took the rest with me.  Guess what's for lunch!?!

Overall the meal didn't take long, we were out by 12:20, but there was a long line forming when we walked out.  Oh and before we left, Mr. G spotted a local celebrity!