By now I'm sure you've figured out that I love Thai food.  Eventually I'll try making it myself and let you know how it turns out.  For now, I'll continue to frequent my favorite restaurants.  Before checking out a film at the Tribeca Film Festival, Mr. G and I decided to grab a quick dinner at Spice.  We went to the Chelsea location, even though the Union Square location would have been closer.  We have been to the Chelsea location several times but I have to say this was by far the best meal either of us have ever had there.

We were running late so the manager (he was dressed like one, but never actually confirmed that's what he was) took our order at the door while waiting for a table to clear.  In my hurry to order, I asked for the Tamarind Whole Fish, I was pretty sure that wasn't what I actually wanted but by then it was too late so I figured if I didn't like it, I would eat Mr. G's Tuna and spice fried rice.

Our food arrived within 5 minutes of sitting down.  Imagine the look on my face when this guy arrived at the table. I really wish I had a better picture, but yes that's a WHOLE RED SNAPPER! Tail, head, eyes and all.  At that moment, I confirmed I placed the wrong order.  But with 20 minutes left to get to the film, I decided to dig in.  Ladies and gentlemen, this was BY FAR the most delicious meal I have ever had at Spice.  It could probably rival as one of the top two Thai dishes too.  The fish was crispy and sat around a pool of tamarind sauce.  The sauce by itself was incredible.  Sweet but spicy.  I was eating spoonfuls and couldn't believe how tasty it was.  The fish, crispy on the outside but moist on the inside.  Although it wasn't bathed in the tamarind sauce, it definitely had its own flavor so even eating it without the tamarind sauce it tasted wonderful.  Once I added the cone of rice, I truly was in heaven. 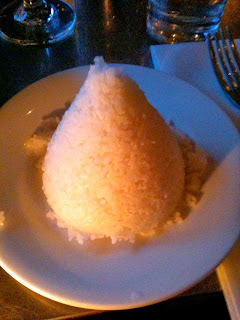 Seriously, if you're ever in the neighborhood, you MUST go to Spice.  I have never been disappointed with my order but this was truly the best meal.  Mr. G's dish was also delicious. 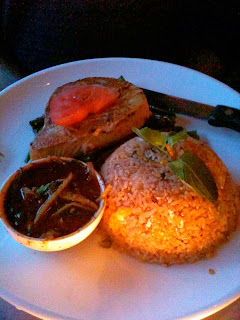 The Ahi Tuna was well seasoned and cooked to perfection.  Of course the spice fried rice was a great complement and the flavors blended well together especially with the sauce.
Posted by Lady T at 11:43 PM