Yesterday was definitely a day filled with gluttonous behavior and lots of culture.  Sadly Sunday has arrived which means the end of the weekend and the departure of my lovely visitors.  But not before one more meal!  While we had planned to make breakfast instead of going out, most of us were slow to roll out of bed this morning which means breakfast was more scattered.

Ms. S prepared scrambled eggs and mini bagels for herself and Mr. K.  I chopped some tomatoes, onions, green and red peppers for a simple omelette with turkey bacon and one slice of wheat toast.  I've been trying to improve my omelette making skills and I think I'm almost there.  My first issue was that I refused to butter the pan.  I was convinced that an omelette could be made with non-stick spray.  However, I have failed several times because of my refusal to use butter.  My issue now is the pan I use.  I keep using a deep skillet, but it's actually much more effective to use a shallow skillet so you can flip the eggs a lot easier.  This time the omelette came out a lot better - here's how I did it. 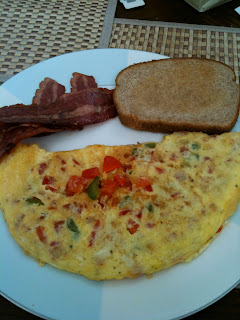 Simple Vegetable Omelette
3 eggs
1/4 cup chopped vegetables.  I use onions, peppers and tomatoes but it's up to you.
salt and pepper to taste
1/2 tsp butter - or whatever amount you need to coat your skillet

In a small skillet, cook onions and peppers until they are tender but not mushy.  Add tomatoes salt and pepper then turn off the heat.  Crack the eggs and add salt and pepper.  Mix the eggs.  Heat your omelette skillet on medium and drop some butter in there.  Move the skillet around until the butter coats the bottom.  Next, pour the eggs in the skillet.  Allow the eggs to cook for a minute or two until it has bubbled over and only a little bit of uncooked egg left.  Spoon the vegetables onto one half of the eggs. 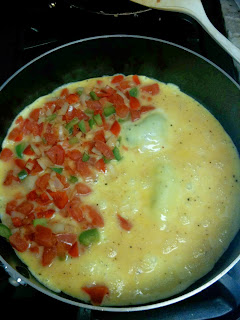 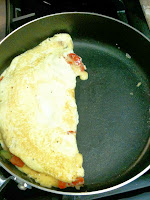 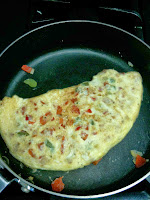 This is usually the tricky part and exactly why you need butter.   It makes it easier to have a successful flip.  As you can see towards the top of my pan in the picture on the left, I had some breakage in the eggs.  Don't beat yourself up if you don't get it the first time, but try again and you'll get it right eventually!  You still have to flip the eggs one more time to let the other part cook.  This part I find really difficult and needed to use the spatula and a little support from my hand.  Still, the meal came out delicious.  Although Mr. G initially said he didn't want any, he ended up taking several bites.  Good luck on your omelette making adventure!
Posted by Lady T at 4:38 PM