How excited am I?!  Ms. S and Mr. K are coming up for their almost quarterly New York visit.  Other than Ovo tomorrow night, we don't have much planned just enjoying the city.  They had some difficulty getting to the city and did not arrive until around 11.  By that time, I had done most of the preparation but still had to put together our multi-course meal.  Bruschetta, medium shells with tomato pesto, lemon herb peppercorn chicken, broccoli and organic salad with balsamic vinaigrette dressing.

Prior to their arrival, I prepared the bruschetta so they would have something to snack on right away.  I chopped 2 plum tomatoes then mixed them with 1/2 tsp dried basil (fresh basil is better but didn't arrive until later), splash of balsamic vinegar and salt and pepper to taste.  Then I cut italian bread and toasted it in the oven for a few minutes.  I took the bread out and rubbed garlic clove on each slice.  After that, it's ready to go.  Top each slice of bread with the tomato mixture.  Simply divine. 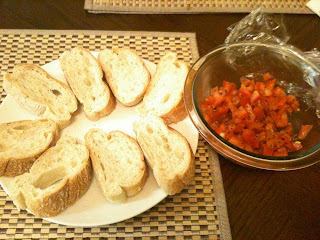 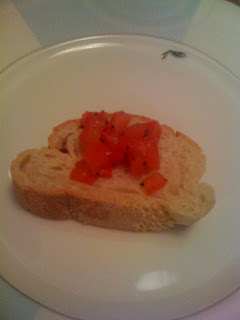 The chicken was easy to make, since I didn't have to do much just pour the marinade onto it and put in the fridge for a little over an hour.  When they arrived, Ms. S was kind enough to slice the chicken breasts in half considering they were the largest pieces I had ever encountered and Mr. K was kind enough to cook the chicken on the stove top.  It was still juicy but well cooked. 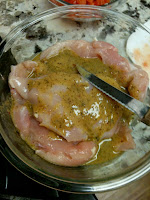 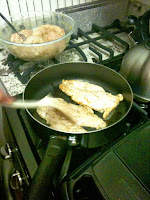 We prepared the broccoli in the wok so it had a slightly asian flair to it, because the wok oil includes ginger and other spices.  Salad was also easy to put together.

The hard part was the pesto.  I initially thought we would be making fajitas so I did not have all the ingredients I needed, but luckily Mr. G came to the rescue with almonds and basil.  The hardest part of this recipe was my ill equipped kitchen.  When I moved, I did not bring my food processor with me.  What a big mistake.  I ordered one right after this process.

Blend the first 5 ingredients.  Based on my prior pesto making experience, this is A LOT easier in a food processor than it is in a blender.  There is not enough liquid in pesto to mix it properly in a blender.  We definitely still had some whole almonds in the final product, although they didn't create too much of a problem.  When the nuts are chopped, gradually add oil then the water, blending until almost smooth.  Season with salt and pepper. 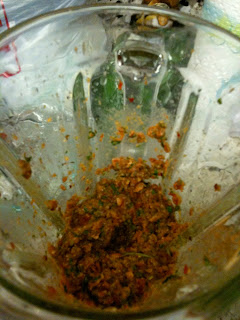 Once the pesto is ready, mix it in with whatever pasta you choose.  We opted for medium shells but this is also delicious with many other variations including bowties, and cavattapi.  Mr. G volunteered to toss the pasta with the pesto. 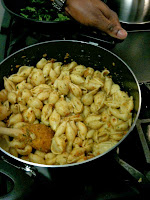 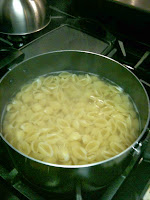 We served the salad first then plated the pasta, chicken and broccoli.  Even though it was almost midnight by the time we sat down to eat, we had a very enjoyable meal and delightful conversation. 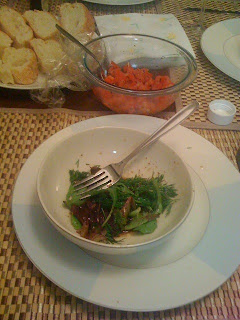 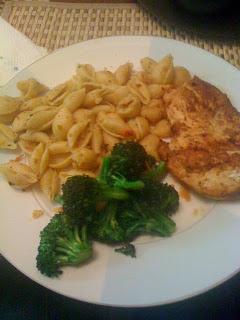 Looking forward to a fun weekend!
Posted by Lady T at 11:55 PM