Mr. G and I ventured out to Hoboken this afternoon/evening for an engagement party.  Mr. G has known the bride-to-be since high school.  I was a little nervous about going since I wouldn't know anyone there but Mr. G, but I figured it couldn't be that bad.

The party was at The Quays and we arrived just in time for food!  It was a buffet and I really wish I had gotten up for seconds. 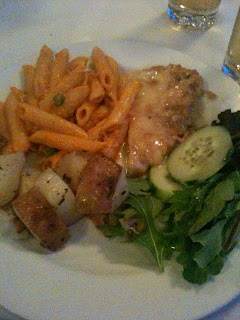 The penne was by far my favorite.  I'm usually not a fan of creamy sauces but the Chicken Francese was also really good.  The potatoes were well seasoned and not too soft. 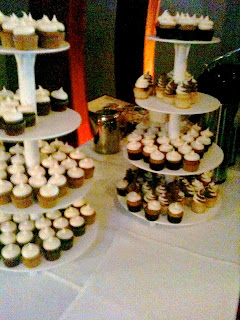 The true delight was the tower o' cupcakes.  I was staring at it for quite a while before I finally decided to just pick up a couple.  I figured how hard could it be chocolate or vanilla.  WRONG! I unwrapped the first one and could tell it was banana nut. Crazy right?! I ended up going back a few times and tried the red velvet, chocolate and mixed vanilla and chocolate cupcakes.  So delicious!!

After Mr. G and I left the party, we decided to stroll around Hoboken and see what they had to offer.  It's a very young town, almost college like in its atmosphere.  But it has far more restaurants than College Park ever did.  We also came across a bakery that had an extremely long line and we didn't understand the hype.  We later discovered that that was the same bakery where the cupcakes had come from.  After having eaten those cupcakes, I can say with certainty that I would have stood in that line, had I known what was in the store!

P.S. Turns out the bakery is pretty famous.  They have a show on TLC!
Posted by Lady T at 7:46 PM