I'm in the Nation's Capital for the night and a little bit of tomorrow for training so I can learn how to write the best brief, but more importantly tonight I hung out with my besties!!!! I've known most of these peeps since freshman year of college, but many of them joined the VBRAT (for the record V&R were not there so really it was BAT M. Night Shyamalan) crew after the fact.  VBRAT is the first initial of the names of a good group of friends from undergrad.  As our group grew, we tried to add other initials that would still form a word, but didn't quite work (too many consonants) so somehow M. Night Shyamalan got thrown into the mix.  Alas, on this blog, I try to refrain from identifying people by their given name and merely use a last initial so it won't be too easy to figure out who they are.  The dinner table was for a group of 10 and there were some people missing so this might get a little complicated.

I arrived at Union Station at 6:08 on the 2163 Acela from New York.  Since this is an imitation travel and food blog, I can't help but comment on various aspects of DC, so please forgive me.  Skip the next few paragraphs if all you care about is the food.

Union station is a mad house, but not too difficult to navigate if you've been there before.  Between the movie theater, food court and shopping plaza, there's a lot to do when your train is delayed.  There's also a taxi stand.  We got in a taxi that cost way more than practical.  First I noticed that the meter started at $3.50 and there was $5.00 of extra charges.  I couldn't help but ask why we hadn't moved yet and we already owed $8.50.  He told me that the $3.50 base is the starting fare for one person.  There's $1.50 for each additional passenger (two coworkers) and, get this, a $2.00 trunk fee.  I had no choice but to laugh in his face when he said trunk fee.  It is exactly what it sounds like.  A fee for using the trunk. Best part is, he doesn't actually have to get out and help you with your bags, he just has to press the button that opens up the trunk then you have to remember to close it after you haul your crap in there.  Real classy D.C., real classy.

After the $17.00 cab ride, I arrived at my hotel.  Me and the Topaz go waaaay back.  I believe July 2006 was my first stay in this Kimpton boutique.  Generally, I get a king room because they are the same price as queen.  There's free wifi, a big huge mirror, sitting space and a desk.  Love it! 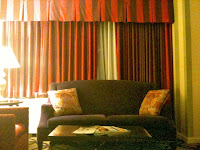 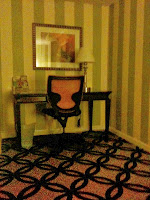 I suggest you request a room across from the elevator.  This is the first time I stayed in this particular room and it's fantastic.  Views of N Street (not that there's much to see), nice big sitting space and a separate changing area before the bathroom.  Yup definitely my kind of space.  Also as a Kimpton rewards member, I got a $10 minibar credit.  Nothing like a nice cold 1.5 liter of Aquafina when you wake up at night dying of thirst :) 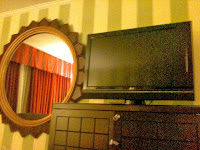 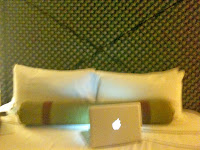 So after checking in, I high tailed it to 19th & Q to meet the crew.  As a New Yorker, I had no choice but to walk however I know quite a few DC/MD/VA natives that would have hopped in their gas guzzlers and circled the block 4 times before they found a parking spot.  Anyway, I was really excited for dinner because Mr. I's birthday is on Wednesday and at the request of his Ms. S (they're engaged!) I bought him a birthday cake.  Not just any cake, but you'll see that later.

Raku has a large outdoor patio space that would have been ideal any day last week, but on a night like this, sitting in the sun room was perfect.  There were a few libations to kick things off but the real fun didn't start until we started ordering.  While I did not sample everything on our table, I'm hoping those that did will leave a comment to let you know whether it's worth your time.  Without further ado, I present the dishes. 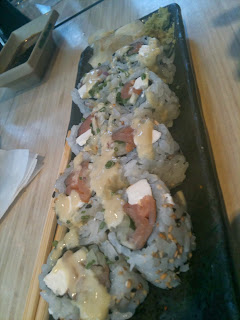 Philadelphia Roll, while I was insulted that Mr. F, Mr. S and Ms. G ordered this roll, I couldn't help but smile that Mr. F was finally trying sushi!  I didn't sample the roll but I would love to hear what Mr. F thought after his raw fish experience. 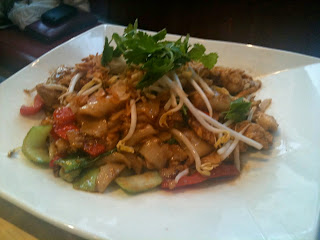 Along with his Philadelphia Roll, Mr. F also ordered what I've decided is Pad Sew UPDATE! I checked the website and it's likely Kway Teow, (wide flat rice noodle, bok choy, bean sprout cilantro with sweet soy sauce) although Mr. S believes its pad thai.  Jury's still out on what it is so Mr. F, I'm hoping you'll resolve the dispute.  The broad noodles, bok choy and lack of egg led me to believe that it's Pad Sew, but perhaps I'm mistaken.  Whatever it was, it looked good.  Mr. F's love for cooked food prevented him from letting me partake. 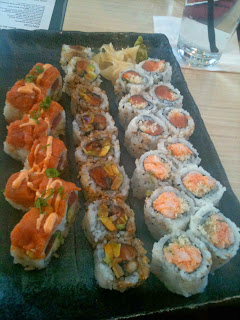 Mr. K and his Ms. S (yes these two) ordered quite the spread.  Crunchy shrimp, crunchy eel, crunchy salmon and deluxe spicy tuna.  Deluxe spicy tuna has pretty much everything the sushi chef has thrown into one roll.  It was fantabulous.  The spice, freshness of the tuna and the delicious flavors had me wishing this was my entree not theirs.  Luckily, they had enough on their plate and didn't miss a couple of pieces :) 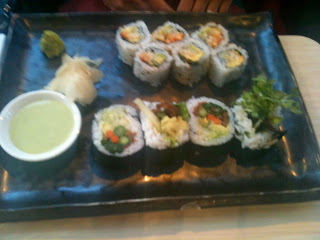 Mr. I's Ms. S ordered an assortment of rolls that looked quite tasty, but there was so little on her plate, I didn't have the heart to ask her to sample it.  I will note that she did not finish it.  After getting a little past half way, she decided to sample Mr. I's Spicy Yellow Curry. 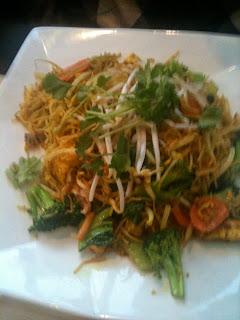 They switched plates and Mr. I used a fork and knife to eat the sushi rolls.  First time I've ever seen that, and I sure hope it's the last! 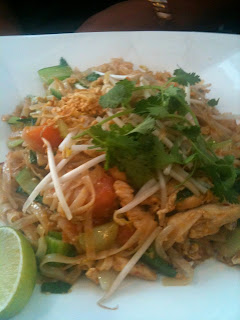 Mr. W-M ordered chicken pad thai.  It looked so good and was right across from me.  But Mr. W-M guarded his plate like a hawk and I didn't have a chance to taste it. 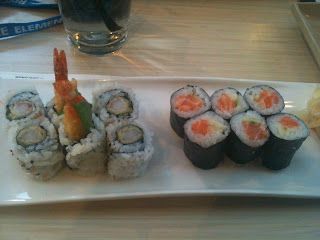 I kept it simple and ordered salmon cucumber and shrimp tempura.  The salmon was really fresh.  Had I known it would be so good I would have ordered sushi or sashimi.  The shrimp was standard fare and they didn't have any special sauce to go with it. 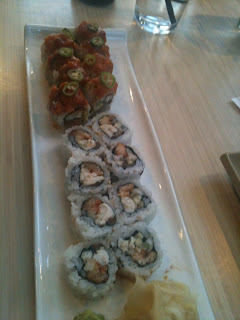 Mr. N ordered the Red Dragon Roll and some other suspicious looking roll.  While the dragon was looking mighty good, Mr. N was not interested in sharing so I just stared at his plate curiously.  How was it Mr. N?

After all our entrees were cleared and we were full, it was time to bring out the big one. 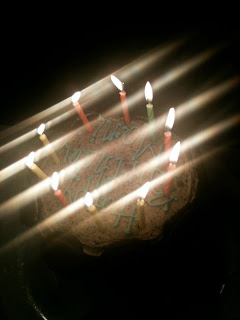 And by big, I mean the colossal Cookies n Creme Cupcake.  That's what they call it after all.  Biggest frickin cupcake that I've ever seen.  Crumbs is no joke and I'm glad I was able to pick this up in New York and transport it to DC. 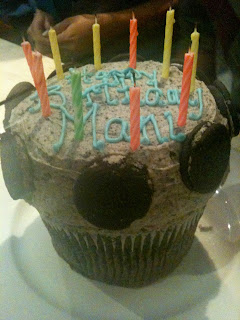 After cake, we went to Circa which was too crowded and ended up at Gazuza.  While I'm not a hookah smoker, some of my friends are so it was nice to find a place that was very laid back to hang for the rest of the night.

As always, it was a pleasure DC, I'll be seeing you again soon.